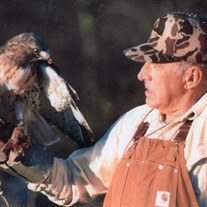 It is with great sadness we announce William John Sculley Sr. passed away peacefully and went to his eternal home on Saturday, March 28, 2020. He was 91 years old. Bill was born on August 30, 1928 in Ridgely, MD to William Arthur and Margaret Price Sculley, where he lived his entire life except for his time in the military and Homestead Manor. He was drafted into the Army and served in the Korean War. He was wounded and honorably discharged with a Purple Heart Medal. On October 26, 1951, he married Irene “Renie” Rampmeyer. Bill was employed at a milk plant until he began his dream job as a Game Warden with the Department of Natural Resources. He retired in 1990 after 30 years. Bill loved to dance and could “jitterbug” with the best of them and liked listening to classic country and bluegrass music. This was especially comforting to him in his latter years. From a young age, he was an avid hunter, fisherman, arrowhead collector and animal lover. His family never knew what kind of creature he would bring home next. There were racoons, homing and tumbler pigeons, hawks, falcons, fawns, doves, horses, ponies, parakeets, cockatiels and numerous hunting dogs. There were always pets in the home, especially his cherished Cricket, Effie, Dimples and Mittens. Bill enjoyed watching harness racing, as he owned several pacers. He was well known at Harrington Delaware Raceway and could be spotted there several nights per week until shortly before his passing. He enjoyed playing softball and supported his grandchildren in their endeavors especially baseball and horse-riding shows. Bill is survived by his children William J. Sculley Jr. (Teresa) of Lusby, Diane Butler of Preston and Sharon Wilkinson (John) of Mardela Springs. He also leaves behind his grandchildren, Ty (Lisa), Dusty, Kandi (David), Skyler, Kasey (Mike), Jordan (Jaime), Jodee and BJ; ten great grandchildren, Connor, Mason, Landon, Chayse, Michael, Grayson, J.J., Niki, Christian and Chelsea; several step grandchildren and step great grandchildren. Also surviving are one cousin, Eileen Hobbs, a niece Carolyn Garrett, nephews Paul “Buddy” Satterfield and Edwin Satterfield. Bill was preceded by his loving wife Renie, a niece Nancy Gearhardt, a sister in law Mary Satterfield and her husband Paul. The family would like to extend a heartfelt thank you to his caregivers from Visiting Angels and Homestead Manor. The family requests that expressions of sympathy take the form of contributions to the following: Ridgely United Methodist Church, 107 N. Central Ave, Ridgely, MD 21660. Due to the impending COVID-19 pandemic services will be private at this time. For online condolences and a current video summary of Bill’s life please visit www.fleegleandhelfenbein.com.

It is with great sadness we announce William John Sculley Sr. passed away peacefully and went to his eternal home on Saturday, March 28, 2020. He was 91 years old. Bill was born on August 30, 1928 in Ridgely, MD to William Arthur and Margaret... View Obituary & Service Information

The family of Mr. William J. Sculley Sr. created this Life Tributes page to make it easy to share your memories.

It is with great sadness we announce William John Sculley Sr....

Send flowers to the Sculley family.