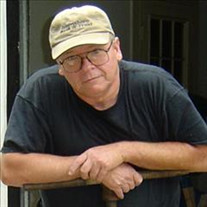 GREENSBORO � William Louis "Butch" Haneke III of Greensboro, MD passed away at UMSMC in Easton, Maryland, July 28, 2018, surrounded by family and friends. Butch had been fighting a variety of rare cancers for more than three decades. He was 64. Born at the U.S. Naval Academy in Annapolis, MD, Butch followed his father, William Louis Haneke, Jr., to serve honorably in the Navy. He is survived by his mother Alice Carr Murchake; son Ian M. Haneke and his children Breanna Haneke and Alyssa Bennethum; brothers Mark Haneke and James Murchake; sister Lisa Murchake Vaught; and several nieces and nephews. He was preceded in death by his wife VerLynn "Lynn" Koch Haneke; daughter Beth M. Haneke; his father; step-father James Murchake; and sister Marcie Haneke. An avid Civil War reenactor, Butch had an encyclopedic knowledge of the conflict before he ever studied it. As a child, on his first visit to Gettysburg, he astonished park historians with battle details of the "high point of the Confederacy" that had been just recently discovered, yet not released to the public. He believed he was the reincarnation of a Confederate soldier who fought at Gettysburg. Butch was active with several Inspire.com ostomy support groups and enjoyed helping new patients transition to their scary new reality. Using humor as therapy, Butch said "you have to have a sense of humor if you're going to live with a bag of poo strapped to your side." A private memorial service will be held in accordance with his wishes.

GREENSBORO &#65533; William Louis "Butch" Haneke III of Greensboro, MD passed away at UMSMC in Easton, Maryland, July 28, 2018, surrounded by family and friends. Butch had been fighting a variety of rare cancers for more than three decades.... View Obituary & Service Information

The family of "Butch" William Louis Haneke created this Life Tributes page to make it easy to share your memories.

Send flowers to the Haneke family.