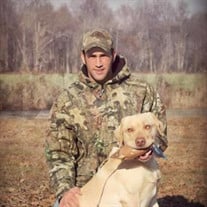 William Nathan Councell “Nate”, 37 of Denton, Maryland passed away on Sunday, November 22, 2020. Nate was born in Easton, Maryland on February 14, 1983. Nate graduated from North Caroline High School. During high school Nate worked for Councell’s Turf Farms and Aldino Farms. He then went on to earn his 2 year degree in Adventure Sports from Garrett College. After that he earned his 4 year degree in Park Recreation Management from Frostburg. Nate was a ski instructor at Wisp while he attended college. Nate then went to work for Pintail Point and Bridgetown Sporting Clays. After that he started Delmarva Designer Concrete and Curbing which he owned and operated for 5 years. His next business venture was becoming part owner of Shore Vapor in Easton. After that Nate started his own vape shops; Oasis Vapor and East Coast Oasis. Throughout the years Nate accomplished his goals and dreams during his education and business ventures all while having several brain surgeries. He enjoyed turkey and deer hunting, being outdoors, boating and being around his friends and family. He is survived by his loving parents; Sherman and Sherry Councell of Goldsboro, Maryland; his sister; Angela Councell of Denton, Maryland; his niece; Alexis Cowgill of Denton, Maryland; his nephew; Dylan Cowgill of Denton, Maryland; his maternal grandparents; Joan and Frank Elliott of Denton, Maryland; Bob and Peggy Phillips of Ocala, Florida and his loving dog Sugar. He was preceded in death by his grandparents; Bill and Betty Jean Councell; and his faithful dog Duke. Nate received a medal of honor and a flag ceremony at Johns Hopkins Hospital from Living Legacy Foundation for his generous organ donation. A viewing will be held on Saturday, November 28, 2020 from 6-8pm at Fleegle and Helfenbein Funeral Home, 106 W. Sunset Ave., Greensboro, Maryland. In lieu of flowers please send donations in memory of Nate to Epilepsy Foundation of Maryland, 1340 Smith Ave. Suite 200, Baltimore, Maryland 21209 or online at www.epilepsymaryland.org or to Living Legacy Foundation, Attn. Ann Bromery, 1730 Twin Springs Road Suite 200, Baltimore, Maryland 21227.

The family of Mr. William Nathan Councell created this Life Tributes page to make it easy to share your memories.

Send flowers to the Councell family.