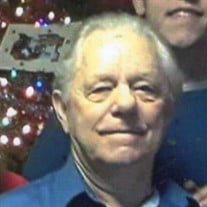 William “Tad” Earl Cook, Sr. passed away on August 14, 2021. He was 78. Born on April 1, 1943, in Herndon, West Virginia, he was the son of the late William Harless Cook and Virsey Hollar. At the age of eight his family moved to Annapolis, Maryland. On September 23, 1989, he married the love of his life, Roberta “Bobbie”. After working hard to provide for his family William retired from Johnson Control in 2004. He used to preach at Greensboro Heights for a few years, ministering to his friends and family, William loved the Lord with all his heart. He enjoyed spending time with his family and old cars. William is survived by his wife, Roberta “Bobbie” Cook and children William “Billy” (Bobbie) Cook, Jr. of Milford, Delaware, and Lorrie (Patrick) Reilly of Dover, Delaware. As well as siblings Darrell (Barbara) Cook of Henderson, Maryland, and Judith (Keith) Copeland of Keystone Heights, Florida. He is also survived by nine grandchildren and two great-grandchildren. He was predeceased by his parents, William and Virsey Cook and daughter Rebecca Riggs. A visitation will be held on Monday, August 23, 2021, from 1130am-1230pm at Fleegle and Helfenbein Funeral Home located at 106 West Sunset Avenue, a graveside service will follow at the Greensboro Cemetery. In lieu of flowers donations may be made to the GoFund me page established by the family at https://de.gofundme.com/f/william-tad-cook-memorial-and-funeral.

The family of William "Tad" Earl Cook Sr. created this Life Tributes page to make it easy to share your memories.

Send flowers to the Cook family.