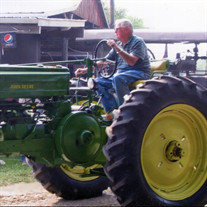 William “Bill” Kinnamon passed away peacefully on April 15, 2021, surrounded by family at the age of 91. Bill was born on September 18, 1929, in Goldsboro, Maryland, the son of the late Lemuel and Christine Kinnamon. Bill proudly served in the United State Army from February 1953 to February 1955. He was stationed in Europe for his term of service and was honorably discharged. Bill owned and operated Kinnamon’s Service in Greensboro, Maryland, from 1957 to 1998. In 1961 he became the Farm Bureau Safe Mark Tire Dealer for Caroline County. He served on the Farm Bureau Board for 20 years. He also owned and operated a school bus for Caroline County for 33 years. He enjoyed farming the land on the home farm. He was a life-long member of St. Paul’s United Methodist Church. Bill was a life-long friend to the community. In 2004, Bill was presented with the Outstanding Citizen Award by the Greensboro Business and Civic Association. This award is awarded to an individual who has made a significant contribution to the improvement of the economic, social or cultural environment of the community of Greensboro, Maryland. In recognition for his outstanding service to the Greensboro Lions Club, he received the Melvin Jones Award. Bill was preceded in death by his beloved wife of 64 years, Gladys. He is survived by three children, Allen Kinnamon (Sandy), Marion Swann and Carolyn Bickling. He is survived by four grandchildren, Lisa Rank, Enid Kelley (Josh), Stacy Swann and Jonathan Swann (Jessica), as well as by four great-grandchildren, Amelia Rank, Oliver Rank, Alice Swann and Max Swann. Bill is also survived by his brothers, Francis Kinnamon (Rosemary), Lemuel Kinnamon and Dale Kinnamon (Gayle). He was preceded in death by his brother, Charles Kinnamon (Ella Mae) his sister, Bettie Kinnamon (Bus) and his sister-in-law, Lee Kinnamon. All are welcome to celebrate his life at a viewing to be held on Friday, April 23, 2021 from 6 to 8 pm at Fleegle and Helfenbein Funeral Home, 106 W. Sunset Ave., Greensboro, Maryland and on Saturday, April 24, 2021 from 12 to 1 pm at St. Pauls United Methodist Church, 300 W. Sunset Ave., Greensboro, Maryland. Services will follow at 1 pm. Interment will be at Greensboro Cemetery in Greensboro, Maryland. In lieu of flowers, donations may be made in Bill’s honor to St. Paul’s United Methodist Church, 300 W. Sunset Ave., Greensboro, Maryland 21639.

William &#8220;Bill&#8221; Kinnamon passed away peacefully on April 15, 2021, surrounded by family at the age of 91. Bill was born on September 18, 1929, in Goldsboro, Maryland, the son of the late Lemuel and Christine Kinnamon. Bill proudly... View Obituary & Service Information

The family of William "Bill" L. Kinnamon created this Life Tributes page to make it easy to share your memories.

Send flowers to the Kinnamon family.