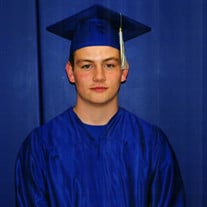 Timothy Ron Stevens, Jr., 19, of Ridgely, passed away suddenly on Wednesday, July 11, 2018. A loyal and gentle son, grandson, brother and friend, he will be missed by many. Timmy was born in Easton on June 13, 1999. He and his brother, Tucker Lane Stevens, moved to Ridgely on May 24, 2002, where they were raised by their paternal grandparents, Barry Philip Stevens, Sr., and Alice Marie Stevens, both Ridgely. As a toddler, Timmy was enrolled at Daycare, Inc., in Centreville, under the guidance of Lora Robbins, Pennie Gill, and April Jones; he was also enrolled in daycare with Tammy and William Taylor, of Ridgely. In both places, they treated Timmy like family. He later attended Ridgely Elementary School, Lockerman Middle School, and North Caroline High School, where his teachers, counselors, and coaches were always there for him. Timmy was truly raised by the "village" of Caroline County, and his family is deeply grateful to everyone who loved him and tried to help him in every way. After high school, Timmy most recently worked at the Caroline County Humane Society, where, in keeping with the sensitivity and kindness of his spirit, he card for the animals who needed shelter and companionship. Even when the shelter was filled with dogs, Timmy always made time to take them for a walk, and he liked to play with them so they had more time outside. Timmy was passionate about adventure and the outdoors. An avid hunter and fisherman, he loved hiking and camping in places like Tuckahoe and Hancock, which is along the C&O Canal on the Potomac River. As a Boy Scout, he traveled to Camp Minsi in Pennsylvania and Camp Henderson in New York, and he spent many summers at Elks Camp Barrett in Annapolis. Timmy was also a talented athlete. He played soccer for teams in the Caroline County Youth Soccer Association and was a member of the Caroline Cougars football team, but his real love was baseball. He started playing baseball in elementary school and continued on to join Caroline North Little League, Junior League, and Senior League teams. In addition, he was a proud Bulldog and played for North Caroline High School's team. Timmy was a left-handed pitcher with a "mean curve ball." On defense, he played either at first base or outfield. Artistic and mechanically inclined, Timmy enjoyed drawing and could often be seen riding his bike around the neighborhood. He was known for fixing things and helping people out when they needed it. He had an open, generous heart and loved children, who were, in turn, drawn to him. Once, when asked what he wanted to be when he grew up, Timmy replied, "Just a boy." His love for his family and friends was apparent to all who knew him. He and his brother Tucker were very close, and Timmy also spent much of his time with his "brother-from-another-mother," Cory Nickerson, Jr. The other "BFF" who never left his side was, of course, his cell phone, which kept Timmy connected to everyone he loved. Timmy his survived by his paternal grandparents, Barry Stevens, Sr., and Alice Stevens, of Ridgely, and Marie Elaine Stevens, of Chestertown; his maternal grandparents, Gene and Charlotte Stowers, of Church Hill; his three brothers: Tucker Stevens, of Ridgely, and Aundray Rogers and Alexander Goldstein, of NJ; his aunt and uncle, Sandra Lister and Gilbert Christopher of Preston, and their children: Macie, Autumn, Lily, and Gabriel; his Uncle, Barry Stevens, Jr., and his wife, Kim, of Grasonville, and their children Chris and Laura Marvel of Grasonville, Rachel Roof, of Baltimore, and Hope Robin Stevens, of Grasonville; his aunt, Melanie Turney, of Centreville, and her children, Cody Hatch of Ridgely, and Jeff Hatch, Jr., of Wye Mills; his aunt Lillian Morris, uncle William Morris both of Kenton: his biological parents Connie Stowers Rogers of NJ, Timothy Ron Stevens, Sr. of Centreville, his girlfriend Hailey Parsons, of Greensboro, and her son Jace, who had a special place in Timmy's heart. Timmy was preceded in death by his Great Grandparents Philip & Violet Stevens, his aunt April Lister, his uncle Mark Turney, and his uncle Mark Morris. Visitation will be held from 3-5 PM on Monday, July 23, 2018 at Fleegle & Helfenbein Funeral Home located at 106 West Sunset Avenue, Greensboro, MD 21639 followed by a memorial service at 5PM. Interment will be at Greensboro Cemetery following the service. Friends and family who will not be going to the Cemetery are invited to got to Ridgely Volunteer Fire Department at 101 Sunset Blvd. Ridgely, MD 21660, where we will gather to share food and celebrate Timmy's life.

Timothy Ron Stevens, Jr., 19, of Ridgely, passed away suddenly on Wednesday, July 11, 2018. A loyal and gentle son, grandson, brother and friend, he will be missed by many. Timmy was born in Easton on June 13, 1999. He and his brother, Tucker... View Obituary & Service Information

The family of Timothy Ron Stevens, Jr. created this Life Tributes page to make it easy to share your memories.

Send flowers to the Stevens family.