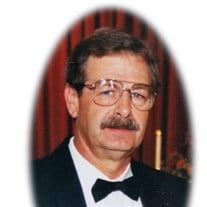 Thomas Linwood Riddleberger, Sr., of Greensboro, MD, passed away on Wednesday, April 22, 2020. He was 75. Born in Greensboro, Maryland, on May 6, 1944, Tom graduated from North Caroline High School in 1962. In June 1965, he married Mary Lou Wyatt. A lifelong resident of Greensboro, he and Mary Lou created a wonderful life with family and friends. After a couple of small jobs, Tom determined that sitting behind a desk was not for him. He opened a building business in 1974 and was a masterful builder for 35 years. Many buildings, structures, and improvements around the town of Greensboro can be attributed to him.. Tom was a loyal member of the Greensboro Town Council for 25 years, and was the Mayor of Greensboro for 10 of those years. He was a member of the Greensboro Historical Society and served on its Board of Directors. Tom was also a member of St. Paul’s United Methodist Church in Greensboro and was a charter member of the Choptank Muzzleloaders. He also enjoyed coaching Senior League Baseball. Tom was an avid golfer and formed many lasting friendships through his love of the sport. He is survived by his loving wife of 55 years, Mary Lou Wyatt Riddleberger of Greensboro, MD; his son, Thomas Linwood “Chip” Riddleberger, Jr., of Dover, DE; his daughter, Mary Jennifer Byrne (Tim) of Joppa, MD; and his grandson, Wyatt Michael Byrne. Tom is also survived by his siblings: R. Glen Wyatt (Deanna) of Greensboro, MD, and Jeffrey W. Riddleberger of Henderson, MD; and a sister-in-law, Ann Riddleberger of Salisbury, MD. He was preceded in death by his parents Robert W. Riddleberger, Sr., and Hilda Thomas Riddleberger and a brother Rev. Robert Riddleberger. Due to the current situation, there will be a memorial service at a later date. Donations in Tom’s memory may be made to the Greensboro Historical Society, 11599 Kibler Street, Greensboro, MD 21639 or to St. Paul’s United Methodist Church, P.O. Box 57, Greensboro, Maryland 21639.

The family of Mr. Thomas Linwood Riddleberger Sr. created this Life Tributes page to make it easy to share your memories.

Send flowers to the Riddleberger family.