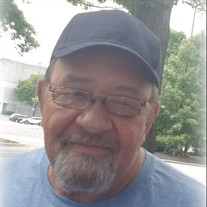 Steve Randall Jackson, affectionately known as Butch, of Greensboro, MD passed away on Monday, July 13, 2020. He was 72 years old. Butch was born on October 17, 1947 to the late Henry C. and Eula M. (Vance) Jackson in Richlands, VA. He was the second child of six and the eldest son. He attended Richlands elementary from grades one through seven until moving with his family to Davidsonville, Maryland in Anne Arundel County, in the early part of 1962. He became a student at Arundel Junior High in Odenton, Maryland. A short time later that year he was employed at Chaney’s Saw Mill at the early age of 14, where his father also worked. At the age of 19 he served in the Army in the Vietnam War. After his two year tour he returned home to the western shore of Maryland and became employed as a Machinist at Hoerner Waldorf Corporation in 1969, located in Severn, Maryland. Although the company changed hands two more times to MacMillian Bloedel Inc., and Atlas Container, Butch remained with them. He was a dedicated, hardworking man who took pride in the quality of the products he made. In 1986 he moved to the eastern shore of Maryland in the town of Greensboro. Where he shared a home with his mom and youngest brother Darrell, a little after his father’s passing. Even living in Greensboro he continued to travel to the western shore to work, where his youngest brother Darrell also worked, until Butch retired in 2009 from Atlas container. Butch was a devoted loving father, grandfather, brother and uncle. He raised one daughter and helped raise three grandsons. He always had an ear to bend, a hand to lend, knowledge to share, a shoulder to cry on when needed, a caring loving heart and his generosity was beyond compare. Butch was a great provider and amazing teacher to his family and would help with any task they had. Just one call to him and he was there. He enjoyed spending time with his family and friends. Whether it was a cookout, Sunday dinner, a movie night or just a great conversation, they all meant the world to him. He had a quick wit and great sense of humor. He was so much fun to be with. He would share a great joke or story just to see his family laugh with joy as well as hearing a great joke. He had a laugh you could feel to your soul. Everything he shared and did with us will be greatly missed. There is a void without him that cannot be filled. Butch enjoyed many things from a great movie, to great music, spending lots of time outdoors to playing games online. He loved horseback riding, fishing, hunting, camping, fixing up automobiles from classic hotrods to pick up trucks. He loved to keep them in immaculate condition. Butch also loved to do landscaping and building projects at home, as well as wood working and restoring furniture. He had so many talents and skills. Mr. Jackson is survived by his daughter; Bonnie S. J. Gallagher and her husband Josh or Ridgely, Maryland; three grandsons; Jason S. Enos of Greensboro, Maryland; Jeremy C. Jackson and his wife Megan of Denton, Maryland; Joseph X. Wojcik of Ridgely, Maryland; three sisters; Priscilla F. Strozier and her husband Lance of Jasper, Florida; E. Karen Persinger and her husband Jerry of Mineral, Virginia; Sheila G. Hearn of Stanwood, Washington; two brothers; Jackie C. Jackson and his wife Marianne of Blue Point, New York; Darrell E. Jackson of Greensboro, Maryland; three nephews; L. Alan Strozier of Greensboro, Maryland; Jerry L. Persinger and his wife Carolyn of Sicklerville, New Jersey; Timothy S. P. Strozier and his wife Debbie of Ringgold, Georgia; three nieces; Donna Einhaus and her husband John of Parker, Colorado; Lea “Elle” M. Vaughn of Edinburgh, U.K.; Tia M. Winch and her husband Wayne of Stanwood, Washington; and several great nieces and nephews; one great great niece; one great great nephew and many cousins. Mr. Jackson requested no formal services. There will be a celebration of his life at a later date.

Steve Randall Jackson, affectionately known as Butch, of Greensboro, MD passed away on Monday, July 13, 2020. He was 72 years old. Butch was born on October 17, 1947 to the late Henry C. and Eula M. (Vance) Jackson in Richlands,... View Obituary & Service Information

The family of Mr. Steve Randall Jackson created this Life Tributes page to make it easy to share your memories.

Send flowers to the Jackson family.