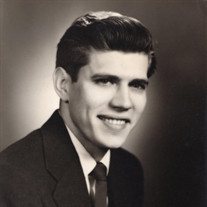 Romolo Richard Befacchia, a longtime resident of Columbia, in Howard County, Maryland, passed peacefully on Monday. April 6, 2020 at the age of 92 following complications from diabetes. He will now join his wife of 65 years, Mary Joan (Christoph) Befacchia whom he greatly missed since her passing in March of 2018. Romolo leaves behind his daughter Joan Catherine Befacchia and her husband Leslie Lepore, son David Bartholomew Befacchia, and daughter Christine Therese Befacchia. Romolo will also be forever remembered by his granddaughter Destiny Cochrane, grandson Nicholas Romolo Lepore and his wife Sarah and great granddaughter Gracelyn Lepore, and his extended family and dear friends. A native of Boston, Massachusetts. Romolo is predeceased by his father Bartholomew Befacchia of Teramo, Abruzzo, Italy (1892-1949), his mother Savina Lucia (Ribolzi) Befacchia of Olginasio di Besozzo, Varese, Italy (1899-2007), and his brother Florangelo Joseph Befacchia, of Queens, New York, USA (1923-1998). After serving in the Army during WWII, Romolo attended Georgetown University in Washington, D.C. where he earned a BS in foreign affairs. Upon graduation, Romolo eagerly applied to work at the U.S. Department of State, Bureau of Intelligence and Research, but he was told that since his family immigrated from Italy, he was barred during that WW-II era, which was a great disappointment to him but it led him to work for The Department of the Navy in Washington, D.C. as a budget analyst until his retirement. Romolo was passionate about family, friends, had a wonderful sense of humor, was an avid reader, and was very engaged with international politics and enjoyed telling stories reflecting on historical events. Romolo a lifelong, devote Catholic and was also a devoted member of the Knights of Columbus – Columbia Council #7559 and was a Sir Knight with the St. Agnes Assembly. Romolo, along with his wife Mary, are to be scheduled for internment at the Eastern Shore Veterans Cemetery in Hurlock, Maryland. As a result of the COVID-19 pandemic and the current restrictions surrounding social distancing standards, a memorial mass will be held at a later date at St. John The Evangelist Catholic Church in Columbia, Maryland. A complete notice will follow. In lieu of gifts or flowers, the family requests that you consider honoring his memory by donating to The American Diabetes Association at: http://www.diabetes.org/donate or by mail at: P.O. Box 15829, Arlington, VA 22215 Memories, condolences and photos can be shared with the family on his tribute wall at Fleegle and Helfenbein Funeral Home at: www.fleegleandhelfenbein.com.

Romolo Richard Befacchia, a longtime resident of Columbia, in Howard County, Maryland, passed peacefully on Monday. April 6, 2020 at the age of 92 following complications from diabetes. He will now join his wife of 65 years, Mary Joan (Christoph)... View Obituary & Service Information

The family of Mr. Romolo Richard Befacchia created this Life Tributes page to make it easy to share your memories.

Romolo Richard Befacchia, a longtime resident of Columbia, in...

Send flowers to the Befacchia family.