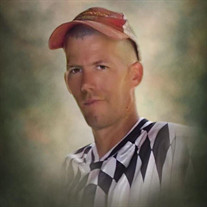 Roger Lee Cohey of Bridgeville, Delaware, died suddenly on July 11, 2021, as a result of a motorcycle accident. Born in Easton, Maryland, on October 4, 1974, he was the son of Ronald Cohey and Brenda Anthony. Growing up in Ridgely, Roger graduated from North Caroline High School in 1992. In 2003, he married the love of his life, Kristal. Their marriage was one of teamwork and devotion. One was rarely seen without the other. Roger was employed by Habitat America. He was a member of the Seaford Elks since 2017 and held the officer position of Leading Knight. Roger was everyone's “go-to man” and a “jack of all trades”. There were few projects he wouldn’t tackle. You would often find him happily helping others fix or replace whatever was needed. One of his favorite pastimes, Roger enjoyed relaxing with his camping family. He especially enjoyed the potluck, family-style dinners that were shared on these camping trips. He was also an avid pool player and an American Pool Association Team League Representative for Maryland and Delaware. Roger was also a Team Captain, participating in many tournaments throughout the years. Roger will be sadly missed and fondly remembered by all who were fortunate enough to know him. His generous spirit will be carried on by his wife Kristal and his siblings Kimberly Matthews (David), Kristina Eberspacher (Alex), brother-in-law Donald “Ray'' Fairbank, Jr.,(Missy), nieces and nephews, Kelsey Larmore (David), Zachery Pridgen, Austin Matthews, Darren Matthews, Alyssa Matthews, Callie Eberspacher, Avery Eberspacher, Donald “Ray'' Fairbank, III, and Cody Fairbank, great-nieces Carleigh and Adalyn Larmore, and honorary nephews Gabriel and Parker Stafford. Roger’s extended family, friends, and his beloved dogs will miss his warm eyes, quick wit and kind smile. We will remember, honor, and miss him every day. Roger is preceded in death by his father Ronald B. Cohey and his brother Ronald P. Cohey. A funeral service will be held at 10am on Saturday, July 17th, 2021 at Fleegle & Helfenbein Funeral Home at 106 W. Sunset Ave, Greensboro, MD. In lieu of flowers please send donations in memory of Roger to the Seaford Elks Lodge #2458 in lieu of flowers.

Roger Lee Cohey of Bridgeville, Delaware, died suddenly on July 11, 2021, as a result of a motorcycle accident. Born in Easton, Maryland, on October 4, 1974, he was the son of Ronald Cohey and Brenda Anthony. Growing up in Ridgely, Roger graduated... View Obituary & Service Information

The family of Mr. Roger Lee Cohey created this Life Tributes page to make it easy to share your memories.

Send flowers to the Cohey family.