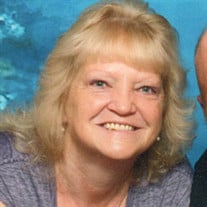 Robin Sue Korell of Henderson, MD died September 18, 2019. She was 65. Robin was born on June 26, 1954 in Easton, MD, to Sue Reed, she had two brothers Kenny and Don Reed. They grew up in Denton, MD. She married Adam Korell who was her soul mate. He was her rock when times were hard. They enjoyed watching movies and boxing matches at home. They also enjoyed going out to dances and burning up many dance floors. They had two daughters, Tammy Kellenbenz and Windy Broadwater. They were very proud of their girls. Robin spent a lot of time with the girls growing up. School projects, cheerleading, sports, drama and talent contests. These girls blessed her with three granddaughters. The first was Chelsea Smoke and her sister Madison VonEssen. Kasey is the youngest of the three. Robin spoiled them, but said its not spoiling them, it’s loving them. It’s not right to not mention the many animals the family cared for throughout the years. They gave so much back with the shenanigans they’d pull. There were too many to name and we wouldn’t want to leave any out. Robin worked many different jobs before and after her marriage. One of her favorite jobs was Technitrol. She liked the work and enjoyed meeting friends. Some friends became more like family. After 28 years the company moved out of Greensboro. The next job was in Stevensville Vapotherm, a smaller company. She learned so much here, within her first year she could make and assemble an oxygen tank. The people were so nice, even when they were ready to close the big boss came to each of them and tried to help them find a new job. So as you can see Robin was very family oriented, a real people person. A funeral service will be held at 2 pm on Sunday, September 22, 2019, at Fleegle and Helfenbein Funeral Home in Greensboro, with a visitation beginning one-hour prior. In lieu of flowers, please direct donations to St. Jude Children’s Hospital, 501 St Jude Place, Memphis, TN 38105, or Shriners Hospitals for Children c/o Donor Relations, 2900 N. Rocky Point Drive, Tampa, FL 33607. To share remembrances or online condolences please visit www.fleegleandhelfenbein.com.

Robin Sue Korell of Henderson, MD died September 18, 2019. She was 65. Robin was born on June 26, 1954 in Easton, MD, to Sue Reed, she had two brothers Kenny and Don Reed. They grew up in Denton, MD. She married Adam Korell who was her soul... View Obituary & Service Information

The family of Mrs. Robin Sue Korell created this Life Tributes page to make it easy to share your memories.

Send flowers to the Korell family.