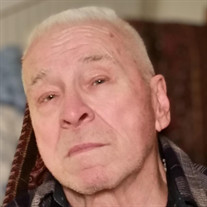 Robert Lee “Bob” Stranahan, Sr., 84, a devoted, faithful Jehovah’s Witness, of Wilmington, Delaware, passed away on March 6, 2022 surrounded by family. Bob was born on April 30, 1937 to Enoch and Idaline (Clark) Stranahan of Easton, Maryland. While attending H. Fletcher Brown Vocational High School in Wilmington, Delaware, he enlisted in the U.S. Navy and served from 1954 to 1958 as an electrician’s mate. His professional career began in 1958 while working for several electrical / industrial contractors. Prior to becoming a Licensed Master Electrician, Bob worked for Atlas Chemical, which became Stuart Pharmaceuticals, and finally ICI Americas, from 1966 to 1976. Not content simply working for others; he created his own business, R.L. Stranahan Electric Service, with the motto “Quality Work - Reasonable Prices.” Bob was truly a jack-of-all-trades; there was nothing he couldn’t fix or finagle into working condition! Always a fan of Country / Western music, especially Hank Williams Sr., Bob wrote a handful of songs, and even sold a few. When 1976-77’s deep freeze on the Chesapeake Bay threatened to crush his beloved 46’ wooden boat, White Elephant, he jumped into action and spent days chain sawing ice blocks. Following the near-devastating weather phenomena, Bob developed and patented the Ice Barrier for (wet storage of) Boats in May 1977; his design was assigned U.S. Patent # 4,074,649 on February 21, 1978. Always a man of action, and never content to rest for too long, Bob spent many years improving his long-time home; first building a shop to contain all his equipment and projects, then renovating the garage into an office, which would later become a bedroom for family and guests. When he wasn’t planting in or harvesting from his garden, he built a gazebo and a deck to better view his landscaping successes. Then he built himself a sunroom, i.e. a man cave, for watching all of his favorite old movies when each day’s sunset had come. After many years as an electrician, he returned to his love of woodworking and refurbishing antiques for fun or profit, or usually both. Bob was preceded in death by his parents, Enoch and Idaline; and former spouse, Priscilla Cales Stranahan. Bob is survived by his wife of 21 years, Suzanne Bowie-Stranahan; his children, Deborah Carpenter of Galloway, NJ; Robert Stranahan, Jr. and husband Don Williams of Pine Hill, NJ; and Andrea Stewart and husband Carl of Newark, DE; stepchildren, Daniel Bowie and wife Paty living abroad; Tiffany Sosa and husband Eloy of Wilmington, DE; and Alexander Myers and wife Adrienne of Elkton, MD; his sister Carol Strannahan of Wilmington, DE; former spouse, Marie Stranahan of Newark, DE; as well as two nieces, two grandchildren, two great nieces, and three great nephews. Burial will take place at the Greensboro Cemetery in Greensboro, MD on Saturday, March 26, 2022 at 10:30 AM. Funeral services will be held at 2:00 PM via Zoom.

The family of Robert Lee "Bob" Stranahan Sr. created this Life Tributes page to make it easy to share your memories.

Send flowers to the Stranahan family.