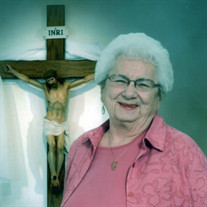 Rita M. Miedl passed away on March 29, 2022. She was 93. Rita was born on May 3, 1928, in Altoona, PA to the late Edward T. Smith and Marie Trexler Smith. She attended Altoona Catholic High School, graduating class of 1945. On August 7, 1948, she married Robert "Bob" 0. Miedl and they resided in Altoona. In 1953, they moved to Greensboro, Maryland. She and her husband owned and operated a local restaurant until 1967 when they closed the doors, and she began working at Electrotherm as a Quality Control Inspector. Mrs. Miedl then began working at the Denton Button shop, where she was a button cutter for 20 years. After the button shop went out of business, she worked at Black and Decker as a laborer until 2003. Rita was a caregiver to many women in the area until 2015. Mrs. Miedl was a member of the American Legion Ladies Auxiliary and the VFW #7937 Ladies Auxiliary, Solidarity, and an usher at St. Benedicts Catholic Church. Prior to her husband's passing in 2005, she and her husband enjoyed fishing together in Pennsylvania and the Chesapeake Bay estuaries. Mrs. Miedl is survived by one daughter, Donna Murphy-Miedl; two grandchildren, Heather Murphy Keller and Wade A. Murphy; siblings Ruth Novack, George Smith, William Smith, Philip Smith, Dolores Perkins; many nieces and nephews. In addition to her husband, her siblings, Charles Smith, Mildred Stafford, James Smith, Thomas Smith, Dorothy Smith, Raymond Smith, and Mary Snowberger predecease her. A visitation will be held Wednesday, April 6, 2022, from 6-8 pm at Fleegle and Helfenbein Funeral Home in Greensboro, Maryland. Services will start at 10:30 am on Thursday, April 7, 2022, at St. Benedicts in Ridgely, Maryland. Interment will take place Friday, April 8, 2022, at 10 am at the Eastern Shore Veterans Cemetery located in Hurlock, Maryland.

The family of Rita Mae Smith Miedl created this Life Tributes page to make it easy to share your memories.

Send flowers to the Miedl family.