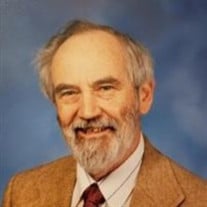 Richard C. Lewis, 92, of Hatfield, died Tuesday, December 7, 2021. He was the beloved husband of the late Ann (Coffin) Lewis, who died in 1981. Born June 26, 1929 in Elkton, MD, he was a son of the late William and Eleanor (Cawley) Lewis. Mr. Lewis graduated from Washington College (MD) in 1951 with a degree in Physics. He was a career scientist at the Naval Air Development Center in Warminster, PA. He was also active in the Hatfield community – a member of the Jaycees, Hatfield Park Commission, Scout Troop 51, and he served as a Hatfield Township Commissioner. Survivors include his children, W.R. “Randy” (B.B.) of Reading; Eleanor (late Keith) of Abingdon, MD, and Carol (Danny) of Newark, DE; eight grandchildren; and two great-grandchildren. In addition to his wife, he was preceded in death by a son, Richard; and brother, William. A visitation will be held between 1:00 and 2:00 p.m. Monday, December 13 at Fleegle and Helfenbein Funeral Home, 106 W. Sunset Ave., Greensboro, MD 21639 followed by burial in Greensboro Cemetery. In lieu of flowers, the family requests that contributions be made in Mr. Lewis’s memory to the American Heart Association, 1617 JFK Boulevard, Suite 700, Philadelphia, PA 19103.

The family of Richard C. Lewis created this Life Tributes page to make it easy to share your memories.

Send flowers to the Lewis family.