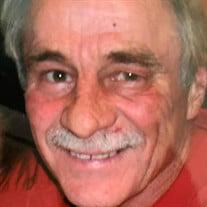 Richard “Dickie” Blaine Bragg, 71, of Henderson, MD, passed away peacefully surrounded by his loving family on Friday, July 16, 2021. He was born in Annapolis, Maryland on December 31, 1949, and was the beloved son of Orville Bragg “Toby” and Barbara Meyers Bragg. Dickie was a member of the Harrington Moose Lodge. He enjoyed playing pool and was a member of a pool league. Throughout his life, he loved to surf, play softball, hunt, and fish, but most of all he enjoyed spending time with his family and friends. Dickie always had a smile on his face, and he got along with everyone. He battled cancer twice, and won. He was preceded in death by his parents, Orville and Barbara Bragg; his loving wife, Bunnie Bragg; his brothers, Fred Bragg, Toby Lee Bragg and Bill Bragg. Dickie is survived by his son, James “Jamie” Bragg (Helena); his sister, Linda Anderson; his grandchildren, Theresa Bragg, Koby Bragg and Maria Bragg; his step grandchildren, Chistopher Shockley, Jordan Kimble, and Nicholas Kimble; and his special friend Bonnie Hayslup A visitation will be held on Tuesday, July 27, 2021, from 5-7pm at Fleegle and Helfenbein Funeral Home at 106 W Sunset Ave, Greensboro, MD. Graveside services will follow at 7:15pm at Greensboro Cemetery. In lieu of flowers please send donations in memory of Dickie to Goldsboro Fire Company, P.O. Box 35, Goldsboro, Maryland 21636 or American Cancer Society, P.O. Box 22478, Oklahoma City, OK 73123.

The family of Richard Blaine Bragg created this Life Tributes page to make it easy to share your memories.

Send flowers to the Bragg family.