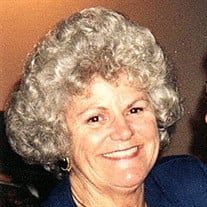 P. Miriam Binebrink, a lifelong resident of Maryland's eastern shore, died on Saturday May 20, 2017, with her children and their spouses by her bedside. Miriam was born July 6, 1930 in Greensboro, Maryland to the late Norman Ellsworth Baynard and Delma Jones Baynard. She is survived by daughter Amy Hansen and her husband Robert of Seaford, Delaware, her son Eric Binebrink and his wife Jeannette of Annapolis, a close lifelong family friend she considered a sister Bonnie Peterson of San Leandro, California, and many cousins, nieces and nephews. Predeceasing Mrs. Binebrink were her parents Norman and Delma Baynard, her husband of 49 years, Robert Paul Binebrink, and very special friends Howard and Clara Strannahan. Miriam has made her residence in a number of Maryland's Eastern Shore towns, including Greensboro, Salisbury, Delmar, Ocean City, and finally residing at Bayleigh's Chase Retirement Community in Easton. Miriam was a graduate of Greensboro High School class of 1947. She was also a graduate of The Delaware State College of Beauty Culture in Wilmington, Delaware. Miriam held a multitude of jobs after graduating from Greensboro High School, however, two of those positions where her most notable; Office Manager for Hanna and Martin Insurance Agency (later becoming Hanna and Kremer) and managing a local landscaping business, Holloway Nursery, which she purchased with her husband in 1964 and operated until retirement in 1985. Holloway Nursery is now the location for many of Delmar's baseball and soccer fields, where Miriam enjoyed watching the town's children play well into her retirement. Among Mrs. Binebrink's accomplishments were; organizing the Greensboro High School Alumni Association, proudly participating in every reunion she could attend. Miriam also volunteered for many years at Peninsula Regional Medical Center in Salisbury. Miriam was known to maintain close contact with classmates, family and friends. She also loved to broaden her experiences by attending special events such as the symphony, operas, dance recitals, and plays put on at the Salisbury University campus. Miriam spent many of her retirement years creating her Memories from Storage which chronicles her life experiences in her own hand. Funeral Services will be 2:00 PM Thursday, May 25 at Fleegle and Helfenbein Funeral Home, 106 W Sunset Avenue, Greensboro. Visitation will be one hour prior to the funeral. Interment at Greensboro Cemetery. The family suggests the Greensboro Historical Society for those wishing to make donations in Miriam's memory, their address is P.O. Box 88, Greensboro, MD 21639.

P. Miriam Binebrink, a lifelong resident of Maryland's eastern shore, died on Saturday May 20, 2017, with her children and their spouses by her bedside. Miriam was born July 6, 1930 in Greensboro, Maryland to the late Norman Ellsworth Baynard... View Obituary & Service Information

The family of Miriam Binebrink created this Life Tributes page to make it easy to share your memories.

Send flowers to the Binebrink family.