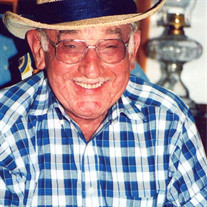 Marvin W. Ebling "Pop", 88, a lifelong resident of Ridgely, MD died on March 30, 2017 with his grandson by his side. He is survived by his wife of 63 years, Margaret B. Ebling; his daughter Carolyn Ebling; his grandson Adam Ebling and his fiancee Heather Robinson; two sisters Elizabeth Faulkner and Mary Fries Haldeman; his friend Ronald Thompson and his wife Barbara; and many nieces and nephews. Born on July 5, 1928, he was one of 10 children to Paul S. and Lillie C Ebling. In addition to his parents he is preceded in death by brothers Roland, Paul, Dudley, Arthur, and Harold Ebling; and his sisters Annice Fike and Mildred Parrott. After working on the family farm and graduating from Greensboro High school in 1945, Mr. Ebling worked briefly for Noble's Farm Equipment and then entered his own farming partnership with his beloved brother Arthur. During his long working career, he also operated the Arco service station in Ridgely and his own home auto mechanic business, worked with special needs clients at the Benedictine School Habilitation Center and provided care taking services for the Owen's family at Jamaica Point in Trappe and for the Salisbury family in Ridgely. His lifelong passion, however, was driving a school bus for Caroline County Public Schools, which he did for 52 years; and he took pride in owning and operating his own bus for 39 of those years. He considered and cared for all those he bused back and forth to school as his own. Visitation with the family will be on Monday, April 3, 2017 from 6:00 to 8:00 p.m. and a funeral service on Tuesday, April 4 at 11:00 a.m. at Fleegle and Helfenbein Funeral Home in Greensboro, with interment to follow at Greenmount Cemetery in Hillsboro. In lieu of flowers donation can be made to the Church of the Brethren, P.O. Box 471, Ridgely, MD 21660.

Marvin W. Ebling "Pop", 88, a lifelong resident of Ridgely, MD died on March 30, 2017 with his grandson by his side. He is survived by his wife of 63 years, Margaret B. Ebling; his daughter Carolyn Ebling; his grandson Adam Ebling and his... View Obituary & Service Information

The family of Marvin W Ebling created this Life Tributes page to make it easy to share your memories.

Send flowers to the Ebling family.