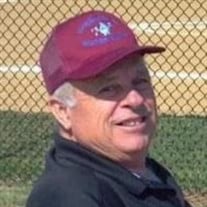 Marion Wm. Jones Jr. “Bill”, 80 of Ridgely, Maryland passed away peacefully at home surrounded by his loving family on Sunday, March 21, 2021. Bill was born in Trappe, Maryland on November 21, 1940. He was preceded in death by his parents Marion Sr. and Dorothy Jones; his sister, Anna Horst; his brother, Mickey Jones. Bill began work as a mechanic at Noble Rebuilder’s in Easton, Maryland before becoming a truck driver for Kent Freight Lines in Wye Mills, Maryland. He continued his career as a truck working for Overnight Trucking, Eagle Freight and Chesapeake Water up to the age of 75. His love of the road also led to his hobby as a HAM radio operator and CB enthusiast. He was a member of the Golden Eagle CB radio club for a number of years. Anyone who had a radio knew the “Sandman”. He was an avid sportsmen where he played soccer and softball for most of his adult life. At one point he managed the Ridgely men’s softball team. Some of his most fond memories were from his day’s of playing soccer with his brothers Johnny and David. His love of fishing and crabbing were shared from his father Marion, which he instilled in his sons, daughters and grandchildren. Bill was also a wood craftsman who enjoyed making furniture pieces for friends and family. He enjoyed his retirement years in his garage tinkering with wood to pass his time. His most prized accomplishments were his children, grandchildren and great grandchildren as he was often overheard telling anyone who would listen. As was often said, “Bill has never met a stranger in his life”. If you ever met Bill, you met a one of a kind. He is survived by his son, Marion Wm. Jones III “Billy” and his wife Mary; his daughter, Teresa “Terry” Warntz and her husband Richard; his son, Rodney Jones and his wife Lisa; his daughter, Crystal Comegys; his brothers; Johnny Jones, Alvin Jones and David Jones; his 17 grandchildren; 23 great grandchildren; and 2 great great grandchildren. A visitation will be held on Monday, March 29, 2021 from 7-9pm and Tuesday, March 30, 2021 from 10-11am at Fleegle and Helfenbein Funeral Home, 106 W. Sunset Ave., Greensboro, Maryland. Services will follow at 11am. Interment will be at Ridgely Cemetery in Ridgely, Maryland.

The family of Mr. Marion Wm. Jones Jr. created this Life Tributes page to make it easy to share your memories.