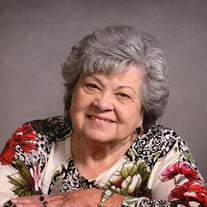 Margot “Marge” Catherine Messner, age 78, of Marydel, MD joined the angels in heaven on Wednesday March 4, 2020. Marge is survived by her loving husband Bob, three children, Marianne Lemon, Margie Short, and Robert Messner Jr. She enjoyed spend time with her seven grandchildren, Gilbert Lemon, Tricia Lemon, Keith Short, Dana Riley, Adam Messner, Mark Messner and Kaylee Messner. Marge also has two sisters, Shirley Cleary and Catherine Logan. On December 31, 1941 in Gloucester, New Jersey, George E. Hampton and Lillie “Rink” Hampton brought Marge into this world. On October 24, 1959, Marge married Bob Messner and began their 60 years life together. Marge spent the majority of her days helping the Marydel community. While Marge was a book keeper by trade, she found her calling as the secretary at Immaculate Conception church. Marge volunteered her time as the president of the Marydel-Hartly Little League, as a Columbiette for the Knights of Columbus, as an Eucharistic minister, and as a member of the Saint Vincent DePaul society. Friends and family may visit on Monday, March 9 from 9–10:30 am at Fleegle and Helfenbein Funeral Home in Greensboro, MD. A funeral mass will be celebrated on Monday at 11am at Immaculate Conception Church in Marydel, MD. Burial is planned for 11am on Tuesday March 10 at Hill Crest Memorial Park in Pitman, NJ.

The family of Mrs. Margot Catherine Messner created this Life Tributes page to make it easy to share your memories.

Send flowers to the Messner family.