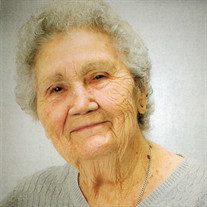 Margaret "Peggy" Dehorty, 87, of Clayton, was called home to meet her Lord and Savior on Monday, November 11, 2019. Peggy was born at Easton Hospital on March 19, 1932 to the late Rosie Bradley. She worked for Playtex of Dover for 41 years retiring in 1999. She attended Sunday services at the Templeville Community Church in Templeville MD. She was also a member of the Harrington Moose Lodge. Peggy loved and thoroughly enjoyed many activities in her life. Pastimes such as working on puzzle books and playing games on her tablet. She also enjoyed camping with her daughter in their full-time camping spot at Trails End in Virginia. She really enjoyed spending time with her family at parties and gatherings. She also was an avid sports fan especially Football, Baseball, and NASCAR. Her favorite sports teams were the Dallas Cowboys and the Baltimore Orioles. She enjoyed watching NASCAR events and was especially interested in the cautions during the races. In addition to her mother, she was preceded in death by her sisters, Doris Young and Pearl Hutson, brother William Smith, daughter Betty Jean Smith, and her son Willard “Jr” Dehorty. She is survived by her daughters Barbara Bailey of Hartly; Sophia Beaver (Carl) of Wyoming; son George Dehorty of Henderson; sisters Edith Edwards (Allan) and Sara Jane Cahall (Richard); 13 Grandchildren, 23 Great Grandchildren, 6 Great-Great Grandchildren and a furry friend Ruger. A viewing will be held from 6pm to 8pm on Friday, November 15, 2019 at the chapel of Fleegle and Helfenbein Funeral Home, 106 W. Sunset Ave., Greensboro MD 21639, the funeral service will be held on Saturday, November 16 at 11 am at the funeral home. Interment will follow the service at Sharon Hills in Dover DE. In lieu of flowers, contributions in Peggy’s memory can be made to Templeville Community Church, care of Barbara Bailey 162 Crystal Rd., Hartly DE 19953. For online condolences please visit www.fleegleandhelfenbein.com.

Margaret "Peggy" Dehorty, 87, of Clayton, was called home to meet her Lord and Savior on Monday, November 11, 2019. Peggy was born at Easton Hospital on March 19, 1932 to the late Rosie Bradley. She worked for Playtex of Dover for 41 years retiring... View Obituary & Service Information

The family of Ms. Margaret "Peggy" Bradley Dehorty created this Life Tributes page to make it easy to share your memories.

Send flowers to the Dehorty family.