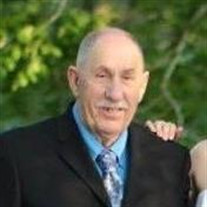 Leslie “Beatle” C. Price of Henderson Maryland passed away on March 12, 2019. He was 69. Born on June 28, 1949 in Chestertown, MD, he was the son of the late Merritt and Jessie Price. A lifelong resident of the Eastern Shore and graduate of Chestertown High School, Beatle served in both the Army and the Air Force. After serving in the Vietnam War and being honorably discharged from the military, Beatle then became a police officer and went back to college to obtain his associates degree in criminal justice and retired after 25 years of service. He then became a truck driver for Holland Enterprises, Inc., driving coast to coast. On May 20, 1995 he married his wife Sandra. Beatle was a member of the Rock Hall Volunteer Fire Company, played on the over forty softball league; loved pitching horseshoes; playing golf, reading, and seeing all of the sights while he was driving trucks. He was a dedicated husband, father and grandfather that would send post cards to the little ones back home when he was on the road. Beatles most cherished past time was being home, spending time with his wife, children, grandchildren, other family members and friends. He rarely met anyone that didn't become a friend. He will be missed by many but most especially by his loved ones. In addition to his wife, Sandra Price, he is survived by his children Heather Kendall (Mark) of Rock Hall; Dana Price (T.J.) of Greensboro; Matthew Lam (Missy) of Ingleside; Brian Lam of Millington; siblings Jerry Price (Carolyn) of Camden, DE; Debbie Hudson (Rick) of Chestertown, MD; eight grandchildren Jay; Jesse; Kayleigh; Colby; Katelyn; Travis; Brianna; Brendon, many nieces and nephews, and beloved extended family members. He was predeceased by his siblings Annabelle Price; Pat Edler; JR Price; Ray Price; brother in law Bobby Edler; grandson Erik Hardy. A service will be held on March 21, 2019 at 2 pm at Fleegle and Helfenbein Funeral Home, P.A.in Greensboro, MD where friends and family may visit beginning at 1 pm or on Wednesday, March 20, 2018 from 6-8 pm. Burial will follow in Sudlersville Cemetery.

The family of Leslie "Beatle" Price created this Life Tributes page to make it easy to share your memories.

Leslie “Beatle” C. Price of Henderson Maryland passed away on...

Send flowers to the Price family.