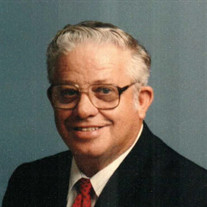 Lee Kermit Morgan, 85, passed away on Friday, January 25, 2019. He was born on December 11, 1933, on a farm in Pitman, Pennsylvania to Charles E. Morgan, Jr and Edna S. (Kahler) Morgan. He was the second of nine children. After graduating from high school in 1951, Lee enlisted in the United Sates Air Force during the Korean War. As an F84 jet mechanic, he completed several overseas tours of duty, being honorably discharged in 1955 as a Staff Sergeant. Lee transitioned to Civil Service at Dover Air Force Base, working as a jet-engine mechanic and crew chief. He retired in 1989, after 34 years of civil service. Only July 21, 1956 he married Shirley Lorraine Schrader celebrating 52 years of marriage, until Shirley passed away in 2008. They had three daughters. His youngest daughter Julie Ann passed away in 2010. Lee had a strong faith in God as demonstrated by his active involvement at Faith Community Church’s Boys Brigade in Camden, Delaware. He then served as a deacon at Capitol Baptist Church in Dover, Delaware for over 30 years. Soon after the death of his wife, he moved to Greensboro, Maryland to live with his daughter. There he attended Refuge Christian Fellowship in Greensboro, Maryland. Lee was an avid outdoorsman who loved camping, fishing, hunting and gardening. His greatest love, however, was his family. In addition to his parents, he is preceded in death by his wife Shirley, daughter Julie Ann, grandson Michael Brian Roth and two siblings. He is survived by daughters Mary Jane Smith and Laura Lee Strasser; grandchildren Jyoti Jennings Roth, Jacqueline Elizabeth Roth Fernandez, Susan Marie Hite, Timothy Joseph Strasser and Joshua Daniel Strasser; great-grandchildren Izek Alexander Mercado, Ivy Fay Jhulana Roth, Patrick Roy Fernandez and Esther Felicitas Ihde and six siblings. A funeral service will be held at Refuge Christian Fellowship at 12629 Ridgely Road, Greensboro, Maryland at 11:00 AM on Tuesday, January 29, 2019 with a visitation one hour prior. To share condolences and memories please visit www.fleegleandhelfenbein.com.

Lee Kermit Morgan, 85, passed away on Friday, January 25, 2019. He was born on December 11, 1933, on a farm in Pitman, Pennsylvania to Charles E. Morgan, Jr and Edna S. (Kahler) Morgan. He was the second of nine children. After graduating from... View Obituary & Service Information

The family of Lee Kermit Morgan created this Life Tributes page to make it easy to share your memories.

Send flowers to the Morgan family.