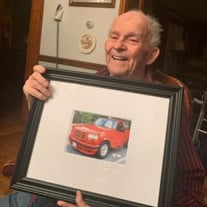 Kenneth Lee Dennis Sr., 88 of Greensboro, Maryland passed away at home on Friday, September 18, 2020. Kenny s survived by his wife of 61 years; Ruth Dean Dennis; his two sons; Alton R. “Buddy” Dennis of Hurlock, Maryland; Kenneth “Lee” Dennis Jr. of Greensboro, Maryland; his daughter; Sharon Kay Dennis of Greensboro, Maryland. Kenny is also survived by two grandsons whom he adored; Travis Lee and Casey Lee Dennis and their mother Virginia “Ginny” Monath of Greensboro, Maryland. Kenny was preceded in death by his parents; Raymond Clifford and Helen Woodhall Dennis; his step-father, Orville Cherry; his sister; Blake Dennis Wesner; a brother; Charles H. “C.H.” Dennis Sr. Kenny was born and lived most of his life in Greensboro, Maryland. He graduated from Greensboro High School on May 28, 1948. Kenny was drafted into the army on January 21, 1954 and was honorably discharged on February 8, 1962. After working for Playtex in Dover, Delaware, Kenny was chosen to work at ILC Dover where he worked as a Modelmaker during the Apollo Space Program and Space Shuttle Program. Kenny received the Apollo Achievement Award as a member of the team that safely put Apollo 11 on the moon on July 20, 1969. On June 3, 1983 Kenny received the Silver Snoopy Award for his work during the Space Shuttle Program, the award was presented Astronaut Story Musgrave. The Silver Snoopy Award is a special honor for outstanding achievements related to human flight safety in mission success. Arrangements will be handled by Fleegle and Helfenbein Funeral Home in Greensboro, Maryland. Graveside services and interment will be held at Greensboro Cemetery on Wednesday, September 23, 2020 at 11am. In lieu of flowers the family suggests donations in Kenny’s memory to Compass Regional Hospice at 160 Coursevall Drive, Centreville, Maryland 21617. Godspeed Kenny Dennis!

The family of Mr. Kenneth Lee Dennis Sr. created this Life Tributes page to make it easy to share your memories.

Send flowers to the Dennis family.