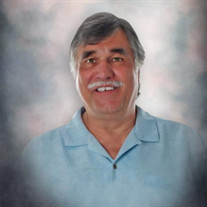 Joseph Anthony Schettini Jr., 67, of Denton, peacefully passed away on September 15, 2018 after a 25 month heroic battle with an aggressive form of brain cancer. He was born on April 8, 1951 in Chelsea, Massachusetts to the late Joseph Schettini, Sr. and Jennie (Ciambrelli) Schettini. Mr. Schettini was lovingly known by his family as Popi and Pop, especially to his beloved grandchildren, and as Papa Joe by many loved ones. He graduated from St. Dominic Savio Preparatory High School, in East Boston in 1969 and from the University of Massachusetts at Lowell in 1973 with a B.S. in Marketing & Business. He married Bridget Keirns in New Hampshire on July 23, 1977. Together they had four daughters, who were the light of their father's life; they gave him five grandchildren, each whom he considered to be a great blessing. He cherished the bonds he had with his three son-in-laws, as well. He was larger than life, both in the physical sense and in his personality; he was a boisterous and proud Italian man with an intense love for family, good food, and classic cars. He spent many years of his young life driving across the US, but always called Boston home. He was an avid sports fan who enthusiastically rooted for the Patriots, Red Sox, Orioles, and Celtics. His love for sports began as a young basketball player and spanned throughout his life as a basketball and softball coach and as the loudest cheerer on the sidelines, especially those of his children and eventually, his grandchildren. He was a man of many talents and he used them as an entrepreneur and a small business owner of Ol' Reliable, in Trappe, MD. However, he found bus driving, both contractually for Talbot County Public Schools, for over 20 years, and later, for Johns Hopkins University and Hospital, to be especially fulfilling. He enjoyed leisurely drives to nowhere, the outdoors, boating, and jet-skiing. He enjoyed many genres of music- the louder, the better. He exhibited compassion for animals throughout his life and always had a dog companion by his side. He recently developed an interest in hot air balloons and tremendously enjoyed the adventure of assisting landing balloons throughout the Eastern Shore and Delaware. Joe was a man of many words. He often implored upon meeting someone to "Please, just call me Joe." He thoroughly enjoyed recalling stories from his youth and imparting his wisdom upon anyone who would listen. He and his wife were known for having an open door for friends and young people to come to for advice. His love for storytelling allowed him many friends and acquaintances with which he would share ideas and experiences. Of all his accomplishments, though, none were as dear to him as his family. He claimed often to be blessed beyond words and so so proud of the bonds among his family. Joe found immense pleasure in bragging about his wife, his daughters and their families, but especially his grandchildren and all of their accomplishments. Joe is survived by his wife of 41 years, Bridget, daughters Jill Schettini of Denton, MD, Jannel Schettini Luoma (John Luoma) of Stoney Beach, MD, Jevanina Schettini (Ted Clark) of California, MD, Jaclyne Schettini (Paul Stump) of Cambridge, MD, and grandchildren, Maxwell and Gianna Luoma, Jack and Hazel Schettini Clark, and Jacelyn Stump, many cousins and extended family of Revere, MA and throughout the Boston Area, as well as close friends throughout the country. He is preceded in death by both parents, Joe & Jennie Schettini, of Denton, sister Janice Luoni of Massachusetts, and many beloved aunts, uncles, and cousins of Revere, MA. The family wishes to extend immense heartfelt gratitude and appreciation to the staff of Cancer Centers of America in Philadelphia, UM Shore Medical Center at Easton, UM Shore Nursing and Rehabilitation Center in Chestertown, Homecall healthcare, Integrace Bailey Chase Rehabilitation Center in Easton, and Talbot Hospice for their medical care and tremendous support throughout this journey. All are welcomed to attend the Visitation on Thursday, October 11th from 6-8 pm at Fleegle & Helfenbein Funeral Home at 103 West Sunset Avenue Greensboro, MD 21639 and funeral services on Friday, October 12th at 1 pm at St. Peter's Catholic Church at 5319 Ocean Gateway, Queenstown MD 21659. In lieu of flowers or gifts, please consider donating in memory of Joe to McAuley Nazareth Home for Boys Inc. at 77 Mulberry Street, Leicester MA 01524, . This is a residential school for boys where Joe served as a mission leader with SSPP in 2006 where he felt a huge connection to the residents and community. Also, please consider making a donation in his name to ABC2 (Accelerate Brain Cancer Cure) at 1717 Rhode Island Ave. NW Suite 700, Washington, DC 20036, . This is a non-profit organization dedicated to changing the perception of and expanding research for further treatment for curing brain cancer. Immediately following the funeral service, the family would like to invite friends to a reception at the Grasonville VFW at 203 VFW Ave, Grasonville MD 21638.

Joseph Anthony Schettini Jr., 67, of Denton, peacefully passed away on September 15, 2018 after a 25 month heroic battle with an aggressive form of brain cancer. He was born on April 8, 1951 in Chelsea, Massachusetts to the late Joseph Schettini,... View Obituary & Service Information

The family of Joseph Anthony Schettini, Jr. created this Life Tributes page to make it easy to share your memories.

Send flowers to the Schettini family.