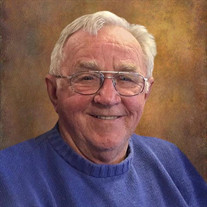 John Richard Mace Jr., 80 of Federalsburg, MD passed away May 17, 2021. Richard was born on February 6, 1941 in Greensboro Maryland. He was preceded in death by his wife, Antoinette Dobraski Mace, parents John Richard Mace Sr. and Anna Louise Langrell Mace, and infant grandson Casey Linwood Mace. Richard went to Greensboro schools, and graduated with the class of 1959. He attended Greensboro Pentecostal Church of God. He was married to Antoinette Dobraski Mace for 60 years and lived on their farm "The Little Pig Farm" in Federalsburg most of his married life. He worked as a welder for Dupont in Seaford Delaware for many years, and He was the co-owner of R&E Welders. Richard was a country boy, and enjoyed welding, gardening, hunting, being a Pop Pop and spending time with his family. He is survived by his daughters, Suzanne Paige Jefferson, Claire Lou Kennedy; his granddaughters, Andrea Jefferson, Sarah Lesich (Jason), Allyson Jefferson, Cali Kennedy; great granddaughter, Raelyn Lesich; and Aunt Betty Langrell Boyd. The viewing will be held on Saturday, May 22, 2021 from 3-4pm at Fleegle and Helfenbein Funeral Home, 106 W. Sunset Ave., Greensboro, Maryland. Services will follow at 4pm. Interment will be at the Greensboro Cemetery.

The family of Mr. John Richard Mace Jr. created this Life Tributes page to make it easy to share your memories.

John Richard Mace Jr., 80 of Federalsburg, MD passed away May...

Send flowers to the Mace family.