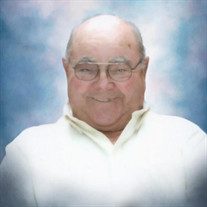 John Edward Clark of Greensboro, MD passed away Friday, May 7, 2021 at University of Maryland Shore Medical Center at Easton. He was 85. John E. Clark was born May 12, 1935 the son of the late Thomas Hazel Clark and Margaret “Shutt” Clark. After graduating in 1953 from Easton High School, he enlisted in the United States Army and served his country for two years. Mr. Clark returned home and continued working in the farming industry throughout his life most recently working as a sales representative for Delmarva Feed and Seed. Mr. Clark also started working part time for Maryland Environmental Services a few years ago. He was a member of the Greensboro Volunteer Fire Co. and was very active in 4H in his earlier years. Mr. Clark enjoyed leather crafting and working with his hands tinkering around with everything. He also loved watching the wildlife in his yard. In addition to his parents he was preceded in death by his wife, Isabella Clark, one sister, Helen Schwarten, one brother, James T. Clark and one great grandson, Clark Bateson. He is survived by two sons, Bruce Clark of Newark, MD, Phil Clark (Nadine) of Denton, MD, one daughter, Karen Monteith (Marshall) of Greensboro, MD, one sister, Margaret “Peg” Hubbard of Denton, MD, five grandchildren, Tiffany, Melanie, PJ, Brandy, Sarah and seven great grandchildren, Bristol, Brady, Luke, Beau, Brooks, Zoey and Isabelle. A visitation will be held Monday, May 10, 2021 from 6-8pm at Fleegle and Helfenbein Funeral Home 106 W. Sunset Ave Greensboro, MD. Services will be held on Tuesday, May 11, 2021 at 10am also at the Funeral Home. Interment will follow the service in Greensboro Cemetery in Greensboro, MD. In lieu of flowers contributions can be sent to the Worcester County Developmental Center 8545 Newark Rd. Newark, MD 21841 or to the charity of your choice.

The family of John Edward Clark created this Life Tributes page to make it easy to share your memories.

John Edward Clark of Greensboro, MD passed away Friday, May 7,...

Send flowers to the Clark family.