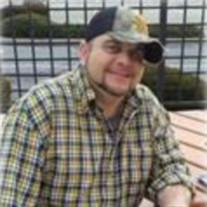 John Joseph Billings, III of Marydel, Delaware passed away on September 24, 2020 at Bayhealth Medical Center in Dover, Delaware. He was 44. Born on April 10, 1976 in Dover, Delaware, he was the son of John J. Billings, Jr. of Marydel, Delaware and Teresa L. Proud of Henderson, Maryland. Joey or Joe, as he was known to friends and family, was a graduate of Polytech High School in Woodside, DE and eventually began working as a truck driver for both J.M.J Farms of Goldsboro, MD and Hignutt Farms of Henderson, MD. As someone who could always get a laugh going, he often used his personal experiences on the road as the target of a few jokes. His true passion in life was working with standardbred horses. No matter where life’s journeys may have taken him he couldn’t stay away from harness racing long as he considered many involved as a part of his extended family. He enjoyed caring for and training equine athletes for competition and gained a vast amount of knowledge from industry mentors and friends such as Janet and Eddie Davis Jr. of J&E Racing, as well as the Joe Hundertpfund Racing Stable. One of his proudest moments, in recent years, was being able to work along-side his father with a challenging horse named SB Mike’s Hot Beach who co-holds the track record at Ocean Downs in Berlin, MD for aged horses. In his free time, John enjoyed the great outdoors and was an avid hunter and fisherman. He was known for his free spirit, big heart and strong-willed personality and as the self-proclaimed, “Karaoke Connoisseur” could be seen and heard at various dive locations performing his rendition of a classic Conway Twitty or George Jones song. In addition to his parents, John is survived by his three children Kylie, Joshua and Paige Billings; siblings Jeffrey and Stacey Billings and granddaughter Railyn Joy. A visitation will be held on Tuesday, September 29, 2020 from 5-6 pm at Fleegle and Helfenbein Funeral Home, P.A., in Greensboro, Maryland. A service will follow at 6pm.

The family of John Joseph Billings III created this Life Tributes page to make it easy to share your memories.

John Joseph Billings, III of Marydel, Delaware passed away on...

Send flowers to the Billings family.