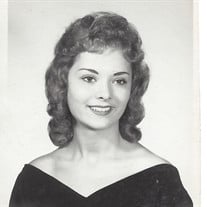 Janet Adele Smith, 72, of Greensboro, passed away on Monday, December 5, 2016 with her family at her side. She was born on December 17, 1943 in Ridgely to the late Edward Hollingsworth and Peggy Frampton. She is survived by her daughter, Lisa... View Obituary & Service Information

The family of Janet Adele Smith created this Life Tributes page to make it easy to share your memories.

Janet Adele Smith, 72, of Greensboro, passed away on Monday,...

Send flowers to the Smith family.