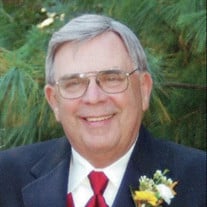 Mr. James Thomas Jones Sr. “Jim”, 81 of Goldsboro, Maryland passed away peacefully at his home, surrounded by his loving family on Wednesday, April 14, 2021. Jim was born in Ridgely, Maryland on May 6, 1939 to his parents, William and Martha Jones who preceded him in death. He is survived by his loving wife of 47 years, Janet Jones of Goldsboro; daughter, Janice Jones of Ridgely; son, “Jimmy” James Jones Jr., and his wife Erin; granddaughter, Brynlee Marie Jones of Marydel; and his brother, Ralph Jones of Ocean Pines, Maryland. Jim spent his younger years as a Pastor at the Victory Chapel in Pearsons Corner. To continue his love of helping and nurturing people, he moved on to become a Radio Host for WCTR in Chestertown, Maryland. His life was further fulfilled by following his passion, when he and his wife opened, owned and operated Veterans homes in Greensboro and Ingleside, Maryland. In partial retirement “Jim” selflessly continued to serve the Lord and engage with those who needed it most; through his various jobs at The Benedictine School in Caroline County, driving a bus for the Dept. of Aging for QAC and Meals on Wheels. Jim was an active member of the Calvary Baptist Church in Denton, Maryland. He enjoyed reading the Bible, listening to Christian music and walking with his wife at many state and national parks. He even backpacked several hundred miles of the Appalachian trail over many years. Later in life as a father, he enjoyed taking trips to the Blue Ridge & Smoky Mountains in Tennessee to share his love of the mountains and camping with his son and daughter. A graveside service will be held on Monday, April 19, 2021 at 11am at Greensboro Cemetery in Greensboro, Maryland. In lieu of flowers contributions can be sent in memory of Jim to Compass Regional Hospice, 160 Coursevall Drive Centreville, Maryland 21617.

The family of Mr. James "Jim" Thomas Jones Sr. created this Life Tributes page to make it easy to share your memories.