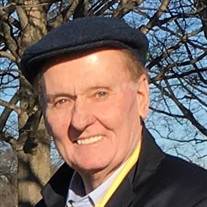 James (Jim) Leo Skelley, Jr. of Crownsville and Greensboro, Maryland, peacefully passed from this life on September 24, 2020. Jim took on the challenge of cancer as he did most of his life challenges – with quiet stoicism, relentless love for his family and friends, battling what could be won, and accepting what could not. He lived a full and rewarding 72 years. Born March 13, 1948 in New York City, Jim was the son of Colonel James and Lillian Skelley. Growing up in an Army family, Jim’s childhood homes included locations in New York; Fort Lee, New Jersey; Fort Lewis, WA; Frankfurt, Germany; Fort Sam Houston, TX; Fort Devens, MA; Norfolk, VA; Fort Monroe, VA; Carlisle Barracks, PA; and, Annandale, VA. Jim attended Kecoughtan High School in Hampton, VA; Trinity High School in Camp Hill, PA; and graduated from Fork Union Military Academy in Fork Union, VA. Jim loved playing basketball. While at Trinity HS, he helped the team to a winning season and became known as “Mr. Basketball.” Jim went to the University of Maryland and joined the KA fraternity. Throughout Jim’s life, he formed lasting friendships. As many friends noted, “he was one of a kind”. After college, Jim worked as a Sales Representative for Forman Brothers Liquor Distributors in Washington, DC. After several years, he joined a good friend and fraternity brother at the Annapolis office of a now-closed mortgage banking company. When the company merged with another, Jim worked with another friend at his liquor store in Bowie MD. They both closed the store, then worked for the Maryland Automobile Insurance Fund. While residing in the Annapolis area, you could always find Jim at Eisenhower golf course or on the Severn River boating or water skiing. An avid sportsman, Jim’s special passion was golf, where he enjoyed the camaraderie and the challenge of the links. Jim golfed with friends routinely, including at Eisenhower and with the “Trinity Terrors” in the U.S. and Ireland. Jim is survived by siblings: Marianne (Buck) Coates; Tom (Sharon) Skelley; Trish Curran; John (Lori) Skelley; Suzanne (Susan) Skelley; five nieces (Stephanie, Michaela, Jennifer, Megan, Kaitlin), two nephews (Matthew, Dan), two grandnieces (Kathryn, Hannah) and three grandnephews (Brayden, Leo, Adam); and, many wonderful friends. Jim would want family and friends to remember him with joy. He wanted his family to take care of one another and his friends to know how much they meant to him. With the on-going pandemic, he would encourage us to remember him now in our own ways and be safe. Jim’s final resting place is the Greensboro Cemetery in Maryland, where all may visit in the years ahead. Donations in Jim’s memory are welcome at Compass Regional Hospice: 160 Coursevall Dr, Centreville, MD 21617; or, compassregionalhospice.org

James (Jim) Leo Skelley, Jr. of Crownsville and Greensboro, Maryland, peacefully passed from this life on September 24, 2020. Jim took on the challenge of cancer as he did most of his life challenges &#8211; with quiet stoicism, relentless love... View Obituary & Service Information

The family of Mr. James (Jim) Leo Skelley, Jr. created this Life Tributes page to make it easy to share your memories.

Send flowers to the Skelley family.