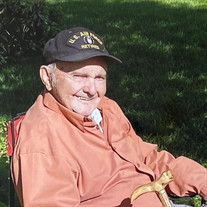 Henry Louis Collomb, Jr. September 19, 1929 – October 7, 2021 Lou passed away peacefully on October 7, 2021, at his home in Felton, Delaware at the age of 92. He was the son of Henry Louis Collomb Sr. of New York City and Evelyn Maguire Collomb of Baltimore, Maryland. Lou was born in Baltimore, Maryland and grew up in Washington, DC. Lou graduated from Central High in Washington DC in 1947 and regularly attended his class reunions. He graduated from the University of Maryland in 1954 and later earned his Master’s Degree in Business and Computer Information Systems at American University. He enlisted in the US Naval Reserves while in High School and transferred to the US Air Force ROTC program while in college. He was accepted into the US Air Force Fighter Pilot Training Program and flew F100 Super Sabre jets during the Vietnam War. After active duty he served in the US Air Force Reserves and retired as Lieutenant Colonel with 42 years of military service. Lou attributed his interest in flying to the time he was invited at the age of 12, to meetings of a local women’s flying club that was held in his home and was taken for a flight over Washington, DC. He worked for JoS. A. Bank setting up their computer systems, and taught Introduction to Computer courses at several local Community College as well as the Jessup Correctional Institution. He volunteered for Habitat for Humanity and helped build 29 houses and a pole barn. He also volunteered as a tax preparer for the AARP/IRS for over 20 years. He is preceded in death by his father, mother and sisters, Nancy Adams and Betty Collomb. He leaves behind Joan, his wife of 26 years. They shared the love of travel and together they camped in every one of the 48 contiguous states then "cheated" and flew to Alaska and Hawaii. He also leaves behind his son Charles (Linda), daughter Renee (James), son Thomas, stepchildren Patricia Nash, Raymond (Janette) Nash, grandchildren Garrett Kroll, Cooper and Owen Esposito, Hannah and Eric Lorenz, Zoe Collomb, Nicholas and Raechel Rukstela, Savannah and Zoe Nash, great granddaughter Rylee Rukstela and numerous nieces and nephews. Inurnment will be held at Arlington National Cemetery at a later date.

The family of Henry Louis Collomb Jr. created this Life Tributes page to make it easy to share your memories.

Send flowers to the Collomb family.