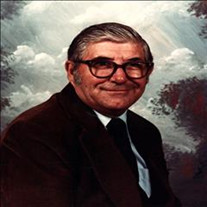 George Herbert(Bud) Walls, Sr., 82, of Denton, MD passed away on Wednesday, June 13, 2018 at Caroline Nursing and Rehab Center in Denton. He was born on January 1, 1936, the son of the late Nathan and Evelyn Eliazabeth Walls of Ridgely. Everyone knew him as Buddy, an avid sports fan and writer on the Ridgely School news. He played baseball and soccer during his years at Ridgely High School. He joined the Air Force in 1956 and returned to his hometown of Ridgely where he married his wife Doris Sparks. The couple were married in June of 1958 and moved to Denton in 1960. Bud worked for Marvels Beverages in Ridgely as a teenager until Mr. Burt Wilkinson put him to work in his print shop. Bud not only set type but wrote articles for Caroline Sun newspaper. He continued to play soccer and eventually went to work for Baker Printing Company in Denton. He coached the Denton Lions Club team with Sonny Henry. He reformed the Eastern Shore Men's Soccer Association consisting of 6 teams. He was instrumental in forming a youth soccer team. He continued writing sporting for the Caroline Review, The Denton Journal and the Caroline Times Record. He was also published in the National Little League Magazine for his poems entitled "Mother" and The Coach". Bud took first place for his story of a team of farmers who played softball in fields where "cow pies" were prevalent. Mr. Walls was a member of the American Legion Post #29 and the Fleet of the Chesapeake(Denton Jaycees). While a Jaycees member he headed several campaigns including "Pennies for Lights" producing Christmas lights for the town of Denton. He also pitched on the Jaycee Slow Pitch softball team the year they won a state championship. He was inducted into the Softball Hall of Fame in 1998. His greatest passions were his family and a column he called "The Sports Scope". In this column he would predict the outcome of certain seasons and wait for the heckling from his readers. He loved watching his children and grandchildren in their endeavors. Bud aslo enjoyed the fans and friends he made through sports. He is survived by his wife of 59 years Doris Sparks Walls, one daughter Deborah Jo Proulx and husband Matt and one son Charles "Chuck" Walls and wife Brenda all of Denton, two grandsons James Dodge and Joseph Bacorn and wife Crystal, one granddaughter Jessica Walls Tuel and husband Jason all of Denton, four great granddaughters Kayla Dodge, Jaidyn Higgs, Emilia Tuel and Adalyn Tuel, two great grandsons Austin Clark and Hayden Bacorn and one great, great granddaughter Melody Jo. In addition to his parents Bud is preceded in death by his sisters Ann Walls and Eleanor Jarrell and oldest son George Butch Walls, Jr. A visitation will be held 6:00 - 8:00 PM, Monday June 18, at Fleegle & Helfenbein Funeral Home, 106 W. Sunset Ave., Greensboro. The Funeral service will be held 2:00 PM, Tuesday June 19 at the funeral home. Interment will follow the service in the Greensboro Cemetery. Suggested donations in Mr. Walls name are to the Alzheimer's Foundation, www.alzfdn.org. To offer condolences and share memories please visit www.fleegleandhelfenbein.com

George Herbert(Bud) Walls, Sr., 82, of Denton, MD passed away on Wednesday, June 13, 2018 at Caroline Nursing and Rehab Center in Denton. He was born on January 1, 1936, the son of the late Nathan and Evelyn Eliazabeth Walls of Ridgely. Everyone... View Obituary & Service Information

The family of George H. Walls, Sr. created this Life Tributes page to make it easy to share your memories.

Send flowers to the Walls family.