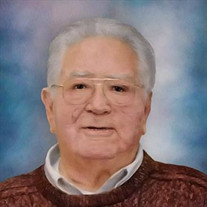 George Milton Godfrey, Sr. “Milt”, 90, of Marydel, MD passed away at his home on September 26, 2016 with his loving wife Ann by his side. He was born March 15, 1926 to the late Alfred and Edna Godfrey in Mt. Laurel, NJ. In addition to his parents he is preceded in death by a sister Elfa and two brothers Alfred and Edward, his son Joseph and 2 grandsons Kenneth and Stephen. He is survived by wife Ann Elizabeth, 3 sons George Jr (Sharon) of Greensboro, Gerald (Cathy) of Marydel, and Thomas (Martha) of Denton and a daughter in law, Rose Godfrey of Marydel, 16 grandchildren, 16 great grandchildren, 4 great, great grandchildren. Milt attended Moorestown High School in Moorestown, NJ and served in US Army from July 1944 to July 1946. A farmer all of his life Milt moved from New Jersey to Maryland in the spring of 1972 and grew a wide variety of vegetables. He was a member of the Caroline County Farm Bureau serving on the Board of Directors and eventually serving as President for 5 years. Milt was also a director on the County Soil Conservation Committee from 1981-1991. The family is grateful for the many caregivers who helped make his last few months comfortable at home and would suggest contributions be made to Caroline Hospice Foundation at 613 S. 5th Avenue, Denton, MD 21629. A funeral service will be held at Greensboro Baptist Church at 2pm on Thursday, September 29th where the family will receive visitors one hour prior. Interment will be on Saturday, October 1st at 11am at the Peacock Cemetery, Sandtown Road, Medford, NJ. Arrangements are being handled by Fleegle and Helfenbein Funeral Home in Greensboro, MD.

The family of George Milton Godfrey Sr. created this Life Tributes page to make it easy to share your memories.

Send flowers to the Godfrey family.