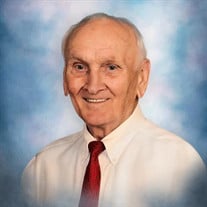 Francis “Donald” Kempel 86, of Church Hill, Maryland passed away peacefully at his home surrounded by his loving family on Monday, March 29, 2021. Born February 28, 1935 in Baltimore, Don grew up as the youngest of five children. He spent his time around church serving as an altar boy, delivering newspapers with his brother, playing sports, cheering on the Baltimore Colts, and growing up with his cousins, nephews and nieces. He was offered a football scholarship to the University of Maryland but opted instead to join the Air Force when he was 17, earning his GED while serving. He loved the Air Force and would fondly recall stories of his time in service. In 1957 he met the love of his life, Catherine Joyce (Cass) and they were married on February 8, 1958. Don and Cass spent the next 63 years happily married. They moved a couple of times before buying a home on Orchard Avenue in Brooklyn, where Don remodeled the entire house by himself. Don worked as a mechanical engineer technician with the David Taylor Research Center, a job he enjoyed because he was able to visit many places. He retired from the federal government in 1994. In 1977, Don moved his family out of Baltimore to the Eastern Shore. Full of energy and able to do anything he set his mind to, Don loved life and lived it to the fullest. He especially loved his family. When his children were younger, he would take them sledding, camping, and vacationing in Ocean City. He enjoyed family parties, golfing with his nephews, going to church on Sundays, decorating his house for Christmas, eating a dandy meal, gardening, taking care of his home and working on many different projects for his children and grandchildren. He was a perfectionist and put much care and detail into everything he did. He and his many hugs will be dearly missed by everyone. He is survived by his loving wife Catherine, his children: Donald Joseph Kempel, Beth Remesch (Ray), Matthew J. Kempel (Kimberly), and Jill Marie King (Kenneth). He was Granddad to 18 grandchildren: Raymond Remesch, Rebecca Remesch, Adam Remesch (Gabriela), Gregory Remesch, Megan Irwin (Peter), Matthew Kempel (Casey), Michael Kempel (Jessica), Pamela King, Donald King, Elizabeth Waters (Kyle), David King (Alyssa), Julia King, Helen King (Erik), Brigid King, Daniel King, Brennan King, Stephen King and Lydia King; 12 great grandchildren and many beloved nieces and nephews. He was preceded in death by his parents Albert and Helen Kempel, his sisters, Constance Conley, Catherine Kempel, Mary McGahagan and his brother Albert Kempel. Don genuinely enjoyed his family and he never hesitated to tell them how much he loved them and was proud of them all. A visitation will be held on Monday, April 5,, 2021 from 6-8pm at Fleegle Helfenbein Funeral Home, 106 W. Sunset Ave., Greensboro, Maryland. A Mass of Christian burial will be held at St. Benedict’s Catholic Church, Ridgely, Maryland. Interment will be at St. Joseph’s Cemetery in Cordova, Maryland. In lieu of flowers the family asks that donations be made to St. Benedict Church, P.O. Box 459, Ridgely, Maryland 21660 or Compass Regional Hospice, 160 Coursevall Drive, Centreville, MD 21617.

Francis &#8220;Donald&#8221; Kempel 86, of Church Hill, Maryland passed away peacefully at his home surrounded by his loving family on Monday, March 29, 2021. Born February 28, 1935 in Baltimore, Don grew up as the youngest of five children.... View Obituary & Service Information

The family of Mr. Francis D. Kempel created this Life Tributes page to make it easy to share your memories.

Send flowers to the Kempel family.