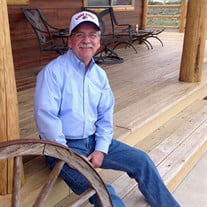 Donald Edwards Riffle, age 69, of Salisbury, Maryland died on Saturday, January 25, 2020, a year after a diagnosis of Pancreatic Cancer. Don was born on January 30th, 1950, in Milford, Delaware. He grew up in Greensboro, Maryland where he graduated from North Caroline High School. He loved to play drums and was in several bands. Don was in All Shore Band every year in high school. He attended the University of Maryland Eastern Shore and performed in their marching band. Don spent more than 38 years in the seafood industry. He worked for American Original from 1980-1984 and was EVP at Seawatch International from 1984-1999. Don and his wife moved to Idaho in 1999 where he began his career with Clear Springs Foods. Don retired in 2016 as EVP of Sales, Marketing and Global Supply Chain Development. He returned to Salisbury in the fall of 2016 to be closer to his family. Don worked for Handy International from 2016-2018 as EVP of Sales and Marketing Department. He was a member of Elks Lodge #817, the Wicomico Yacht Club and Trinity United Methodist Church. He spent many years in the Salisbury Jaycees in the early 1980’s. He loved singing in several church choirs, boating, snow skiing, hiking, camping, playing drums, riding his Harley, and spending time with his family and grandchildren. Don is preceded in death by his parents John Vernon and Mabel Laura Riffle of Greensboro, MD. He leaves behind Ginny Riffle, his wife of 42 years, two children, Susan Bailey, of Salisbury and her husband Gino, and John Riffle, of Magnolia, Delaware, daughter-in-law Jessica Riffle of Lewes, DE, plus grandchildren, Lauren and Rachel Bailey and Jaxon and Jacob Riffle and a sister, Sonja Wood of Lothian, Maryland and her husband Raymond, plus many other family members. The family requests that expressions of sympathy take the form of contributions to the following: Trinity United Methodist Church/Family Life Center, 112 High Street, Salisbury, Maryland, Coastal Hospice, P. O. Box 1733, Salisbury, Maryland 21801, or St. Paul’s Methodist Church, 300 Sunset Ave., Greensboro, Maryland 21639. Services are thru Fleegle & Helfenbein Funeral Home in Greensboro, Maryland. Pastor Fred Duncan will officiate the services held at St. Paul’s Methodist Church, 300 Sunset Ave, Greensboro, Md. on Friday, January 31st at 1 pm. Visitation is an hour before the service. Following service will be a memorial burial at Greensboro cemetery followed by a reception at St. Paul’s Methodist Church fellowship hall.

Donald Edwards Riffle, age 69, of Salisbury, Maryland died on Saturday, January 25, 2020, a year after a diagnosis of Pancreatic Cancer. Don was born on January 30th, 1950, in Milford, Delaware. He grew up in Greensboro, Maryland where he graduated... View Obituary & Service Information

The family of Mr. Donald E Riffle created this Life Tributes page to make it easy to share your memories.

Send flowers to the Riffle family.