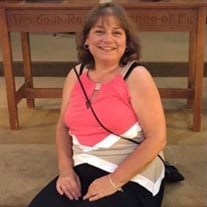 Dawn Michelle Colman Jones of Preston, MD was released into God's arms on Thursday, Jan 28, 2021 at University of Maryland Medical Center in Baltimore surrounded by her family. At the much too young age of 51, she can now breathe easy. Dawn was born July 11, 1969 in Easton, MD. She grew up in Ridgely and attended North Caroline High School. Dawn became a mother and ran a home daycare for about ten years in order to be home and raise her girls. Then in 1999 she went to work for Caroline County as a 911 Dispatcher. She worked as a dispatcher up until 2012 when she had to stop working due to Pulmonary Hypertension (PH). Dawn was very community oriented and was a member of the Ridgley Vol. Fire Co. Ladies Auxiliary for 10 years, F.R.G Leader for Delta Company in Elkton, President of Bears that Care Midshore Toy Drive and Leader of the Eastern Shore Pulmonary Hypertension Support Group. Dawn was awarded Maryland Mother of The Year in 1999. Everyone who knew Dawn saw an example of how you can be an angel to those around you long before you leave this earth. Her loving care went far beyond her daughters and grandchildren. She touched the lives of so many people, including being the answer to the prayers of a childless couple, blessing them with their twins Amanda and Jacob Atkinson as a host carrier. Some of her favorite things included spending time with her family, ringing her cow bell at her grandchildren’s sporting events, cooking, camping, and eating crabs. Dawn was also well known for her chicken salad and homemade soup. She was preceded in death by one brother, Ray Colman and her grandparents, Carlton and Mary Pinder. She is survived by four daughters, Jessica, Heather, Katie (Derick) and Cari Jones all of Preston, MD, five grandchildren, Derek, Brooks, Savannah, Maeley, and Aaliyah all of Preston, MD, daughter by heart Bobbie Jo Trossbach of Sudlersville, MD and numerous other extended family and friends. A visitation will be held Sat. Feb. 6, 2021 from 1-3pm at the Preston Vol. Fire Hall. A Celebration of her Life will begin at 3pm. In lieu of flowers contributions can be sent to Pulmonary Hypertension Association 8401 Colesville Rd Suite 200 Silver Spring, MD 20910 or online at www.phassociation.org or Preston Vol. Fire Company P.O. Box 44 Preston, MD 21655. Arrangements by Fleegle and Helfenbein Funeral Home 106 W. Sunset Ave. Greensboro, MD

Dawn Michelle Colman Jones of Preston, MD was released into God's arms on Thursday, Jan 28, 2021 at University of Maryland Medical Center in Baltimore surrounded by her family. At the much too young age of 51, she can now breathe easy. Dawn... View Obituary & Service Information

The family of Ms. Dawn Michelle Jones created this Life Tributes page to make it easy to share your memories.