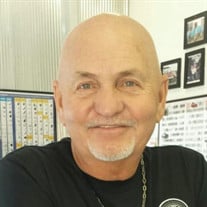 David P. Williams passed away early Wednesday morning, July 22nd, 2021, in Easton, MD. Dave (Ebe, Daddy Dave, Double D, Mr. Cook, Pop Pop) a resident of Greensboro, MD, was 71 years old when his soul departed this earth. Born May 17th, 1950th in North Beach, Maryland to Sarah May Sterdivant and Stanley A. Williams. Dave grew up on a tobacco farm located in Gambrills, MD, learning how to work with his hands and an assortment of tools and farm equipment. Dave was #7 of 8 siblings and a graduate of Arundel High School. In April of 1970, at the age of 19, Dave was drafted into the U.S. Army and served during the Vietnam War. June - August of 1970 Dave was stationed at Fort Knox Kentucky for his service school training as an Armor Recon Specialist. During the war he drove an APC (armored personnel carrier) and was awarded the following service medals and achievements: National Defense Service Medal, Vietnam Service Medal, Combat Infantryman Badge, Vietnam Campaign Medal W/60 Device, Sharpshooter Badge Rifle M14, Expert Badge Grenade and 2 O/S Bars. In September of 1971 after returning from Vietnam, Dave married his sweetheart, Katheline Cook. The two welcomed their daughter Gloria Nicole "Nikki Williams" Locky into their family in December of 1985. Although Dave and Katheline parted ways in 1996, they remained lifelong friends. Dave began his career in the tire business when his best friend, Bernie Cook and Bernie's father, Arthur Cook, brought Dave into their family business venture. Arthur, the visionary and father of the group, helped to mentor and guide Bernie and Bill Cook along with his new son-in-law Dave. Together, they founded Black Diamond Tire Company. After much success with Black Diamond, the 4 men each branched off to form their own individual businesses in the tire and automotive industry. In 1978 with the help of Arthur Cook, Dave and his wife Katheline opened Cook's Tire Center 2 in Harrington, DE, choosing the name "Cook's" after its mentor, Arthur Cook. Dave remained in business for 39 years until 2017 when his business was passed onto his niece (Bernie Cook's daughter) Candy A. Cook. To this day Cook's Tire Center 2 is still thriving and supporting the local community of Harington DE. The Williams and Cook families both morn the great loss of Dave together after a long history of family friendships. Dave enjoyed spending time driving his 1956 Chevrolet Bel Air, watching westerns, the Washington Redskins and NASCAR. You often would see him riding his Harley, attending car shows, and drag racing. He spent many mornings having breakfast downtown Greensboro and enjoyed supporting his local communities and businesses of Greensboro, MD and Harrington, DE and sponsoring his daughters’ sports teams. His home was a place many came to congregated over the years for cook outs, pool parties or simply to hang around and tinker in the garage with him. Dave was known for his generosity, sense of humor and potato salad. His love for his country ran deep and the most important things to Dave were his family and friends. In his later years Dave enjoyed spending holidays and vacations visiting his daughter, son in law and 3 granddaughters who thought the world of their beloved Pop Pop. Dave is survived by his daughter Gloria Nicole (Williams) Locky, Son-in-law Christopher R. Locky, 3 granddaughters who he adored, Sage (9), Iris (7) and Aspen (5) Locky all of CO and his 2 grand-pups Gunner and Minnie. Dave is also survived by his former wife and friend Katheline Cook, brothers Jim (Arlene) Williams of DE, Clint (Nan) of TX, Doug (Nancy) of MD and sister Sibby (John) of MD. A long list of nieces and nephews on both the Williams and Cook sides of the family who he viewed like his own children, great nieces and nephews and other extended family. He is survived by his niece and business partner Candy A. Cook of MD, longtime friend Bill Newcomb of MD and close friend Josh Parker of MD. Dave was proceeded in death by his mother Sarah and father Stanley Williams along with siblings Melvin (Brenda) of MD, Gloria (Jimmy) Cunningham of MD and Ray (Jean) of DE. Dave is also preceded in death by his childhood best friend and brother Bernie (Candy) Cook of MD and close friend Edward (Mona) Deusa of DE. A visitation will be held Wednesday, July 28th, 2021, from 1-3pm at Fleegle and Helfenbein Funeral Home located at 106 West Sunset Avenue in Greensboro Maryland. A meal will follow at the Harrington Fire Hall for those that wish to join at 4:30pm. In lieu of flowers memorial donations - Gary Sinise Foundation at www.garysinisefoundation.org/donate/ or Wounded Warriors at support.woundedwarriorproject.org

The family of David Paul Williams created this Life Tributes page to make it easy to share your memories.

Send flowers to the Williams family.