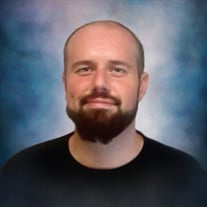 David Thomas Ayers Jr. was born on June 1, 1984 to David Thomas Ayers Sr. and Linda Sue Ayers at Kent General Memorial hospital in Dover, Delaware. He unexpectedly transitioned into eternity to be with our Lord and Savior on August 11, 2016. In addition to his best friend and nephew, William Albert Ireland, lovingly known as little Bill, David was preceded in death by his two nephews: Matthew Ireland and Stephen Ott; his maternal grandparents: Aleine and James Christopher; and paternal grandmother Nancy Ayers. David was educated in the Caroline County Public School system; graduating class of 2002. After graduating, he was employed by Barkers Landing as a heavy equipment operator until medical needs prohibited his duties. His most recent wish was to return back to work in the construction field. David was given the nickname and affectionately known as “Big D” by many friends and family. He was an avid fan of the football team the Washington Redskins and loved to debate about their winnings. He liked to attend events with his father encompassing their passion for riding motorcycles and being a part of a motorcycle family, About 12. He collected superman memorabilia and loved representing by wearing his superman t-shirt and pj’s. David took pride in his family in particular his role as a father. Although he fought his own daily medical limitations he took the role of fatherhood very seriously. His daughter, Harper, daddy’s princess, and his soul mate and fiancé Jami Butler were the center of everything he did. As a youngster, David dedicated his life to the Lord at Greensboro Baptist Church. He and his nephew Matt attended together on the day they both gave their lives to the Lord. David leaves to cherish his memories, his loving and dedicated parents David and Linda Ayers; his soul mate and fiancé Jami Butler, his precious daughter Harper Serenity Ayers; his sisters: Karen Schmitt and Angel Schmitt-Cintron; brother in law Alfonso Cintron; nieces Brittany and Arianna Cintron and Alissa Schmitt; nephews James and Nathan Schmitt, Jeffrey Ireland, Brandon Cintron, Brent Cintron, Brady Cintron and a host of other family including great-nieces, great- nephews, cousins, aunts, uncles, and many other extended family and friends.

David Thomas Ayers Jr. was born on June 1, 1984 to David Thomas Ayers Sr. and Linda Sue Ayers at Kent General Memorial hospital in Dover, Delaware. He unexpectedly transitioned into eternity to be with our Lord and Savior on August 11, 2016.... View Obituary & Service Information

The family of David T. Ayers Jr. created this Life Tributes page to make it easy to share your memories.

Send flowers to the Ayers family.