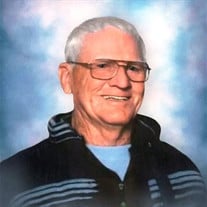 Charles Harry Kinnamon, Sr., 87, died on July 30, 2018 at the home of his daughter Sheila M. Kinnamon Hunteman and husband, Michael Hunteman, in Hurlock, Maryland. He lived in Greensboro, Maryland for over 50 years before moving in with his... View Obituary & Service Information

The family of Charles Harry Kinnamon, Sr. created this Life Tributes page to make it easy to share your memories.

Send flowers to the Kinnamon family.