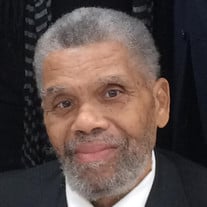 Charles Edward Gibson, 82 years old of Melrose Park, PA answered his call from God and took flight to his eternal home on December 25, 2018, while a patient at Abington Hospital in Abington, PA. Charles was born on May 28, 1936 in Talbot County to the late Pearl Benson Gibson and Roy Gibson. Charles received his education in Talbot County Public Schools and was a graduate of Moton High School, Easton, MD. Following graduation he worked several jobs in Easton and Cordova, MD. Charles was employed with Sommermaid Dairy Products, in Doylestown, PA in the warehouse and shipping department for many years and retired from Sommermaid in 2001. On July 14, 1962, Charles married the love of his life, Lucille Marie Rogers Gibson. Their first home was in Easton, MD. A couple of years later they moved to Philadelphia, PA. Later they purchased their beautiful home in Elkins/Melrose Park, PA. Charles loved their home and he truly made it a home for Lou and their children, Kevin, Mark and LaTelle. Charles will always be remembered for his kindness, love for others, being an encourager and sharing advice on any topic that you shared with him, and being proud of all of his family members and their accomplishments. Charles was an avid sports fan of the Philadelphia Eagles and Phillies baseball team. He loved attending Mark and Kevin's basketball games. He always enjoyed playing basketball and competing against his sons and nephews and bragging about how he could show them a thing or two. He really enjoyed cooking, eating and loved attending family gatherings. Charles will always be remembered for his love and support during Lou's illness, for he took his marriage vows seriously, 'in sickness and in health', he stood by her side. Charles loved the Lord and would often talk about his encounter with God during his first heart surgery and how God talked with him and cared for him during his recovery period. Without a doubt Charles loved and knew the Lord and would always share what God had done for him and continued to do for him right up until his passing. Charles was preceded in death by his parents: Roy and Pearl Gibson; his brothers, Richard Gibson and Leroy 'Sonny' Gibson; his sisters, Mary Gibson Brooks and Frances Gibson Thomas. Charles leaves to cherish his memories; a loving and devoted wife of 56 years, Lucille Marie Rogers Gibson; three children, Kevin Rogers (Melonie) of Utah; Mark Rogers (Marlene) of New Jersey; LaTelle Rogers Colon (Joel) of Florida; a special nephew William Rogers of Georgia; a god-daughter Nicole Fisher Jackson of Denton, MD; a brother Gerald Gibson (Ida) of Easton, MD; sister-in-laws, Vivian Fisher (Thomas) of Denton; Sylvia Potter (Robert) of Easton, MD; Karen Rankin (John) of Smithfield, VA; brother-in-laws, Harlan Leon Rogers, Jr. of Philadelphia, PA; G. Kermit Rogers of Richland, North Carolina; Wayne Rogers (Jill) of Magnolia, DE; seven grandchildren and one great granddaughter; a host of nieces, nephews, cousins and friends.

Charles Edward Gibson, 82 years old of Melrose Park, PA answered his call from God and took flight to his eternal home on December 25, 2018, while a patient at Abington Hospital in Abington, PA. Charles was born on May 28, 1936 in Talbot County... View Obituary & Service Information

The family of Charles Edward Gibson created this Life Tributes page to make it easy to share your memories.

Send flowers to the Gibson family.