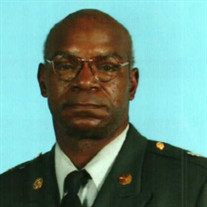 Charles Richard Demby was born November 2, 1957 to the late Raymond and Carrie Demby. He departed this life suddenly on November 21, 2018 at Easton Memorial Hospital. Charles married Rolenia Danette Demby on December 31, 2016. Charles attended Kent County High School. In his early years, he worked various jobs; he worked at Old Wharf Inn, security at Chester River Hospital, as a gas attendant at Bennett’s and the snack bar at the bowling alley. He played softball for Chestertown Homeboys and loved to shoot pool. He enlisted in the military on November 29, 1976 as a Food Service Specialist until May 2012. Charles worked for the State of Maryland at Queen Anne’s Armory as their groundskeeper and maintenance man until August 2018 when he retired. He was a member of Abrams Memorial Church in Denton, Maryland under the leadership of Pastor Thomas Fisher where he served as an usher and on the kitchen committee. He is preceded in death by his father and mother, sister-in-law Damita Demby, father-in-law Robert Burke and brother-in-law Walton Burke. He leaves to mourn, a wife of almost 2 years, 3 sons Charles Demby, Jr., Guyshawn Demby, Keith Demby, grandchildren Amani, Jay-Ceon, Za’maya, Guy’zeir, Nini, Niarira, Ta-nyiah, LaKeith, Jr., Terrianna, Kyairra, one Aunt Evang Louise Raison, brothers Raymond Jr. (Trish), James (Bessie), William and Kevin (Ashley). His only and only sister Priscilla Demby and a host of nieces, nephews and cousins, his closest friends Spencer and Palmer, his mother-in-law Evalena Burke and brother and sister-in-law Mr. and Mrs. Harold Bordley. A funeral service will be held on 12:00 PM at Bethel A.M.E. in Chestertown, Maryland with a visitation one hour prior. Burial will follow at St. Daniel’s United Methodist Church in Barclay, Maryland. To share memories and condolences please visit www.fleegleandhelfenbein.com.

The family of Charles Richard Demby created this Life Tributes page to make it easy to share your memories.

Charles Richard Demby was born November 2, 1957 to the late Raymond...

Send flowers to the Demby family.