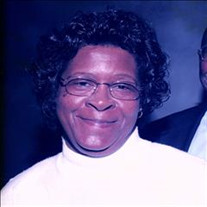 Carolyn Jean Pritchett Tate of Queen Anne, MD departed this life on Saturday, June 09, 2018. She was the daughter of the late Raymond and Mary Elizabeth (Pritchett) Nichols both of Queen Anne, MD. Carolyn, affectionately known as "Sister", was born on November 9, 1946 in Queen Anne, MD. Carolyn was educated in the Talbot County Public Schools and graduated from Robert Russa Moton High School in 1964. Carolyn worked at several manufacturing facilities until she accepted a position at Technitrol Pulse Components in Greensboro, MD; where she was employed for 17 years. Carolyn married her late husband, Allen Tate in 1978. Both of them were members of Allen AME CHurch, Hillsboro, MD. She was a devoted and loving wife. She adored her two children and nurtured them with positive qualities to help enhance their lives. She loved her family and loved spending time with them, especially at family gatherings, laughing and dancing. She enjoyed sewing, curtains were her specialty. She loved painting and hanging wall paper. She was always the chef in her own kitchen; cooking and baking, especially her lemon flavored cold oven pound cake. Then one day make potato salad for a family function and the rest is history, she became known as the "Potato Salad Queen". Overall, Carolyn has a kind and loving mother, sister, aunt and friend. She had a kind and gentle spirit and was always willing to lend a helping hand to anyone. Carolyn is survived by her two children, Karen Pritchett of Queen Anne, MD and Rodney Pritchett(Theresa) of Harrington, DE. Carolyn is also survived by two brothers; Eray Pritchett(Maxine) of Ridgely, MD and Paul Wayman(Ann) of Queen Anne, MD; two sisters; Malinda Whiting(George) of Queen Anne, MD and Diane Baker (Bernard) of New Castle, DE and three sisters-in-law; Daisy Pritchett of Queen Anne, MD, Gloria Pritchett of Wilmington, DE and Gloria Nolen of Tuskegee, AL and a host of nieces, nephews, cousins, and friends. Carolyn was preceded in death by her husband, Allen Tate, her parents Raymond and Elizabeth Nichols, three brothers- Howard, Robert and Elwood Pritchett; two sisters - Erain Briscoe and Crissandra Moaney.

The family of Carolyn Jean Tate created this Life Tributes page to make it easy to share your memories.

Send flowers to the Tate family.