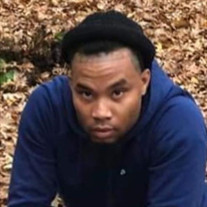 Brandon Justin Jackson, 32, of Greensboro, MD died on February 2, 2019. He was born to Michael Jackson, Sr. and Jennell Wesley-Black on Ocotber 1, 1986. Brandon attended Kent County public schools until 2002. He went to Frederick Douglass High School, where he received his high school diploma in 2004. Brandon attended the University of Maryland Eastern Shore from 2004-2005, and then received an certification in HVAC 2010. He recently was employed at BWI working as a technical person, and was about to start classes for his commercial driver’s license. Brandon loved his family & adored every moment with his children. His favorite thing to do was to shop for or buy cars (especially his Crown Vic's & Cadillac's). His love for fashion matching up his hats to match his tennis shoes was something he didn't play about. He also loved his seafood and especially loved chitterlings. He loved having fun and making sure whomever was around him was enjoying themselves as well. It was never a problem speaking his mind when he was passionate about something because if he didn't agree about it, you definitely knew it!!! Brandon loved going down memory lane talking about his first born child being born, family functions or just kicking it with the homies around the way. He was preceded in death by his brother, Anton Black, his grandfather, Roy Jackson Sr., and his uncle, Milbert Wesley. He leaves to cherish his memories his mother, Jennell Wesley-Black; father, Michael Jackson, Sr., dad, Antone Black, Sr.; grandmother, Herline Jackson; grandparents, Milbert and Mildred Wesley; two daughters, Breasia Jackson and Nikayah Jackson; three sons: Zay'mere Jackson, Sincere Jackson and Damani Jackson; and one more child on the way; four sisters: Latoya (James)Holley, Monique(Andre) Sorrell, Nicole Black and Latonia Black; three brothers: Michael Jackson, Jr., Aaron Lloyd and Antone Black, Jr.; and a host of nieces and nephews. Brandon was a father figure to many that he loved as his own children; and enjoyed spending time with four special ladies: Nalanda Barrett, Shamira Bulter, Cheneta Green and Lashawnda Murray. A service will be held Monday February 18, 2019 at 1:00 pm at the Bethel A.M.E. church in Chestertown, MD where friends and family can visit beginning at 11:00. Burial will follow at Morgnec Cemetery in Chestertown.

The family of Mr. Brandon Justin Jackson created this Life Tributes page to make it easy to share your memories.

Send flowers to the Jackson family.