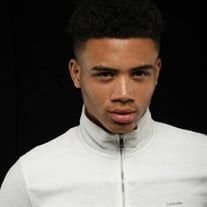 Anton Black was born to Antone Black, Sr. and Jennell Black on October 18, 1998 Kent and Queen Anne's Hospital located in Chestertown, Maryland. He received his education from Kent and Caroline school systems, graduating from North Caroline High School in 2016. While attending North Caroline High School, Anton was a wide receiver for the varsity football team and participated in track and field and was quite an asset to both teams. After graduating high school he studied criminal justice at Welsey College in Dover, Delaware. Shortly after his time at Welsey, Anton pursued a modeling career with Genesius Modeling School in Washington, D.C. He modeled in a show at New York's Fashion week for Jason C. Peters. In his spare time Anton loved to spend time with his family and friends; he always expressed how much he wanted his family to have a good relationship. He had a smile that would light up a room and he enjoyed dancing; he would often spend hours making dance videos inspired by his favorite artists. Anton was preceded in death by his grandfather McKinley Black. He leaves to cherish his memory: his parents Antone and Jenelle Black; siblings Nicole Black, Monique Sorrell (Andre), La Toya Holley (James), Antone Black, Jr, Michael Jackson, Brandon Jackson, Aaron Lloyd and Latonia Black, , grandparents Milbert and Mildred Wesley and Pauline Harris, as well as a host of uncles, aunts, nieces, nephews, cousins, coach and mentor Rob Thompson, friends and special friends Katyra Boyce, Derrick Adams, Elijah, Derek & Devon .

The family of Anton Milbert LaRue Black created this Life Tributes page to make it easy to share your memories.

Anton Black was born to Antone Black, Sr. and Jennell Black on...

Send flowers to the Black family.