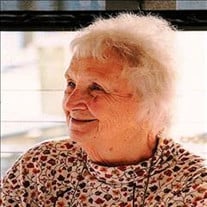 Anne Musachio of Ridgely, MD died on November 18, 2017 at the Caroline Hospice in Denton, MD after suffering a severe stroke. She was approaching 92 years of age. Born December 19, 1925 in Bath, NY she was the daughter of Anna and Wysil Garron. She grew up on a general farm in Bath with her siblings, Steve, Alex, Mary Jane, Michael and Eli, who all predeceased her. She attended nursing school in New York City and became a registered nurse. After working as a nurse in New York and the Panama Canal Zone, she joined , she joined the US Air Force and served as a nurse in Alaska during the Korean Conflict. She achieved the rank of captain. After her military discharge she attended and graduated from the University of New Mexico and shortly thereafter took a position at the U.S. Public Health Service Indian Hospital in Shiprock, New Mexico. It was there that she met and married Michael Musachio, a USPHS Environmental Health Officer. After starting a family in 1963 that was blessed with 4 children, she became a full time mother and housewife. In anticipation of Mike's retirement, the family moved to Ridgely in 1979 where they operated a small strawberry and blueberry U-Pick farm. She was often referred to as "the Strawberry Lady". Anne was a humble, warm hearted person who enjoyed family, friends, reading and doing crossword puzzles. She was a faithful member of St. Benedict's Church in Ridgely, Maryland. In addition to her loving husband and children and their spouses Michael (Diane), Marie (Emil), John (Sue) and Robert, she is survived by 10 grandchildren, 4 great grandchildren and numerous nieces and nephews. Her contagious smile, twinkling eyes, sense of humor and warm hugs will be dearly missed. A mass of Christian burial will be held on Wednesday, November 22, 2017 at St. Benedict's Catholic Church in Ridgely, at 2:00 PM with a visitation one hour prior. Interment will follow at Holy Cross Catholic Cemetery in Greensboro. In lieu of flowers, the family ask that donations be made to Caroline Hospice or St. Benedict's Parish. To share memories and condolences please visit www.fleegleandhelfenbein.com

Anne Musachio of Ridgely, MD died on November 18, 2017 at the Caroline Hospice in Denton, MD after suffering a severe stroke. She was approaching 92 years of age. Born December 19, 1925 in Bath, NY she was the daughter of Anna and Wysil Garron.... View Obituary & Service Information

The family of Anne Marie Musachio created this Life Tributes page to make it easy to share your memories.

Send flowers to the Musachio family.